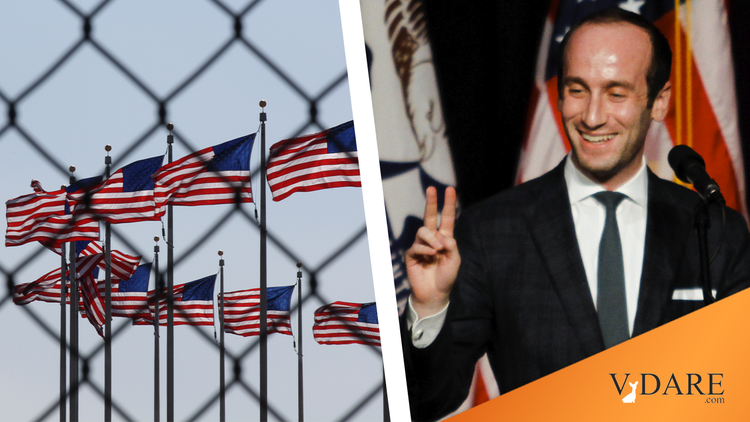 "Basically The Plot Of The Purge"—Leftists Hating On Stephen Miller (And VDARE.com) and  GUARDIAN Breathlessly Reports Stephen Miller's Planned "Second-term Immigration Blitz"—It's What Americans Voted For In The FIRST Term

NBC has an interview with Stephen Miller, conducted over the phone by Sahil Kapur, a Punjabi-American born in Texas.

Note the quotation marks in the subtitle:

As I've said before, these are things that should, ideally, have happened in the first term, and pundits are unsure if there will be a second term, but it sounds good:

The objective, he said, is "raising and enhancing the standard for entry" to the United States.

Some of the plans would require legislation. Others could be achieved through executive action, which the Trump administration has relied on heavily in the absence of a major immigration bill.

"In many cases, fixing these problems and restoring some semblance of sanity to our immigration programs does involve regulatory reform," Miller said. "Congress has delegated a lot of authority. ... And that underscores the depth of the choice facing the American people."

Miller, who serves in a dual role as an adviser in the White House and to Trump's re-election campaign, stressed that he was speaking about second-term priorities only in his capacity as campaign adviser.

Immigration has been overshadowed by surging coronavirus case numbers and an economy shattered by a nearly yearlong pandemic, but it was central to Trump's rise to power in the Republican Party, and Miller has been a driving force for the administration's often controversial policies to crack down on illegal migration and erect hurdles for aspiring legal immigrants.

Miller has spearheaded an immigration policy that critics describe as cruel, racist and antithetical to American values as a nation of immigrants. He scoffs at those claims, insisting that his only priority is to protect the safety and wages of Americans.

And he said he intends to stay on to see the agenda through in a second term if Trump is re-elected.

In the near term, Miller wouldn't commit to lifting the freeze on new green cards and visas that's set to expire at the end of the year, saying it would be "entirely contingent" on governmental analysis that factors in the state of the job market.

Asked whether he would support reinstating the controversial "zero tolerance" policy that led to families' being separated, Miller said the Trump administration is "100 percent committed to a policy of family unity," but he described the policy as one that would keep families together in immigration detention by changing what is known as the Flores settlement agreement.

Over the past year, the administration has sought to amend the Flores agreement, which says children can't be held over 20 days in Immigration and Customs Enforcement detention. If it succeeds, immigrant families could be detained indefinitely as they await their day in immigration court.

On Trump's watch, asylum grants have plummeted. Miller wants to keep it that way. He said a second-term Trump administration would seek to expand "burden-sharing" deals with Honduras, Guatemala and El Salvador that cut off pathways to the U.S. for asylum-seekers.

"The president would like to expand that to include the rest of the world," Miller said. "And so if you create safe third partners in other continents and other countries and regions, then you have the ability to share the burden of asylum-seekers on a global basis."[More]

As I said, this is stuff that should have been done earlier, but there have been genuine successes. As for expanding the "asylum seeker" thing to the rest of the world reminds me of my 2001 plan to send all asylum seekers to non-US places where they wouldn't be persecuted. Mexico, for example, must be suffering a shortage of workers. My article on the subject, addressed to the then-Presidente of Mexico, Vicente Fox, was entitled Dear Mr. Fox: Please Find Attached our Poor/ Tired/ Dispossessed, Etc.