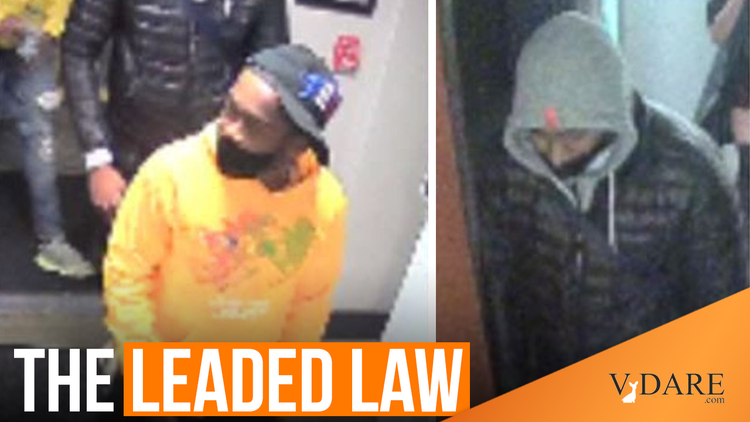 This is a typical report of what I call a "Leaded Law" shooting, far different from  mass shootings committed by maniacs who know how to shoot:

Police look to identify two people in video from hotel where 7 people were shot near University of Maryland, College Park, by Angela Roberts, Baltimore Sun, November 1, 2020

Prince George’s County Police are searching for two people of interest in a shooting late Saturday that left seven people injured at a party inside a hotel room near the University of Maryland’s College Park campus.

The victims — all of whom are adults and do not attend the university — suffered non-life-threatening injuries, police said Sunday. Five have been released from the hospital.

The motive for the shooting remains under investigation. Police released photos of two people of interest. [More]

The photos are below, this seems to be a black thing, something I guessed from the fact that no one was killed:

Briefly, the Leaded Law, suggested by an anonymous blogger in 2016, is

As I explain at greater length in the article linked at the top of the page, blacks have very bad marksmanship skills.
In addition to this being a typical black party shooting, it's also a typical example of minorities Not Social Distancing, but partying at close quarters:

“Last night an isolated incident occurred following an unsanctioned Halloween gathering. Our policies, in accordance with local and federal guidelines, prohibit such gatherings on our premises. As such, our staff acted swiftly to engage local authorities to disband the gathering. We continue to work with the authorities on the ongoing investigation.”

This Tweet from Chicago is not from the Baltimore party, but illustrates what I mean by "Minorities Not Social Distancing":

Looks like this house party may have been even better than the one we shared from Wrigleyville over the weekend. #Chicago pic.twitter.com/nByD9OFJaM

And of course, the news does not say anything about the race of shooter or victims, which is why we need to use a Secret Decoder Ring.

not reporting raceMinorities Not Social DistancingLeaded Law
<< Previous
Next >>
LATEST