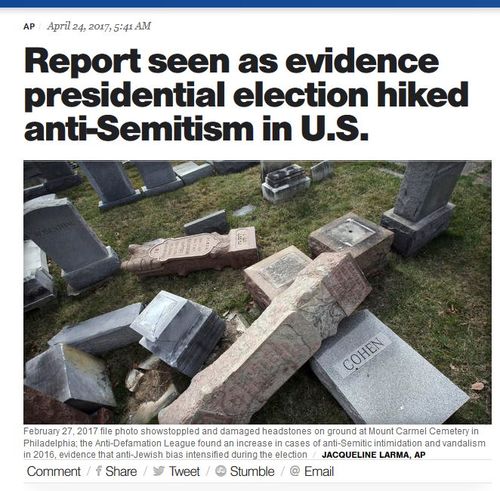 A CBS story about an ADL report claiming (a) anti-Semitic incidents are up, and (b) it was caused by the Presidential election is illustrated with a picture of toppled headstones in a Jewish cemetery in North Philadelphia.

Narrative Collapse has set in in the case of the famous bomb threats against Jewish Community Centers,  but the ADL is forging on regardless: 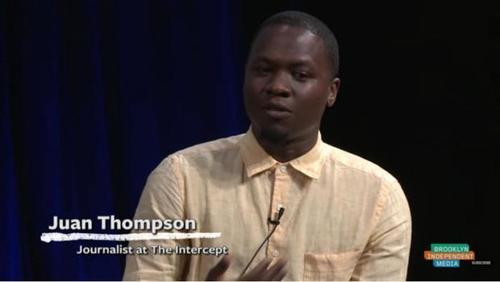 The preliminary 2017 numbers include a wave of more than 150 bomb threats that started in January against Jewish community centers and day schools. Authorities arrested an Israeli Jewish hacker who they said was behind the harassment. The ADL insists those threats should still be considered anti-Semitic since Jews were the target. During the same period, a former journalist in St. Louis [Pictured at right—picture added by me.]was also charged with threatening Jewish organizations as part of a bizarre campaign to intimidate his former girlfriend. But authorities believe the Israeli man is primarily responsible.

I couldn’t help wondering if Narrative Collapse had set in on the toppled headstones in Philadelphia. In Brooklyn, toppled headstones which had provoked similar coverage turned out to have toppled due to neglect and cold. [Senator Chuck Schumer says Jewish cemetery vandalized by anti-Semites, but the NYPD discovered who was really responsible., by Mark Meckler, Patheos,  March 6, 2017]

The Mount Carmel Cemetery in Philadelphia has certainly seen some neglect. It’s an old cemetery where no one is being buried these days:

The vandalism occurred at least five days before it was reported to police, according to the superintendent of another cemetery. Bill Doran, head of Laurel Hill Cemetery, said he visited Mount Carmel and noticed the destroyed graves on Feb. 21. Doran said he saw the gate unlocked and assumed Mount Carmel officials knew about the damage. Vandalism at Jewish cemetery predated reports, superintendent says, Phillynews.com, February 28, 2017

However, it may be that the tombstones in Mount Carmel cemetery were toppled by local “teens”:

At the five-acre Mount Carmel cemetery in the city’s Wissinoming section, people in the cemetery business and others say there has long been a low-grade desecration as teens party there, leaving behind beer bottles and other trash.

And over the years, vandals have periodically wreaked worse damage….

Harry Boonin, who in 1979 founded the Jewish Genealogy Society of Philadelphia, and who has periodically visited Mount Carmel for research, said the surrounding neighborhood was a thriving Jewish community in the early 1900s, but that had long faded out, leaving the cemetery less in demand.  “When there are fewer burials, less money comes in,” he said.

Some have suggested that the vandalism reflected unfocused malice rather than anti-Semitism. Boonin said he understood vandalism to be a routine problem at Mount Carmel, especially the toppling of headstones. “It almost seemed like a neighborhood tradition,” Boonin said. 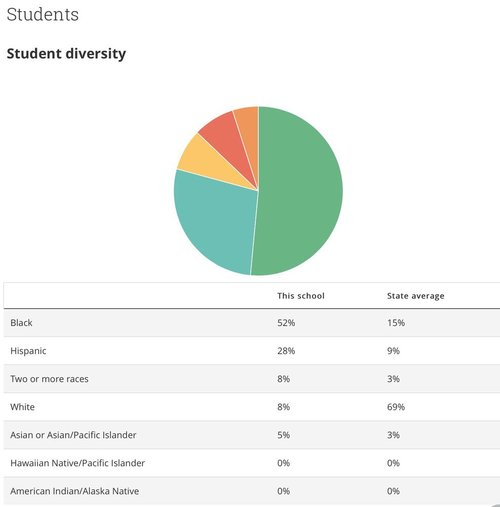 So the reason the cemetery is unguarded and unprotected from local teens is because the Wissinoming section of North Philadelphia is no longer a Jewish neighborhood. How does something like that happen? It's called "white flight." So what kind of neighborhood is it now?

Well, this chart at right gives the races of the students at the nearby William H. Ziegler Elementary school (a four-minute bike ride away). Ignoring the annoying green, teal, and other non-representative colors, they reveal that the school is 80 percent non-Asian minorities, 52 percent black and 28 percent Hispanic.    It's only 8 percent white.