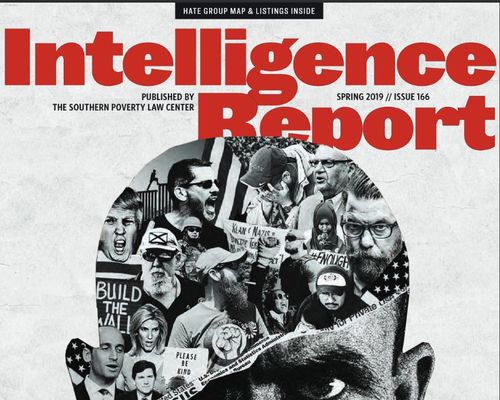 SPLC Mentions VDARE.com, Gets Details Wrong Again. With All Their Money, Can't They Hire A Factchecker? 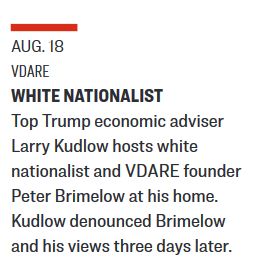 The SPLC's latest "Intelligence Report" [PDF]  includes a couple of smears of VDARE.com. In their "Hate In The White House" section, devoted to proving that that Trump White House has wrongthinkers in it, they mention that Larry Kudlow, one of the least "wrongthinking" guys in conservative politcs, invited VDARE.com Editor Peter Brimelow to his birthday party. (Also academic Darren Beattie attended a conference with Peter Brimelow.)

When they get to the section on immigration hate groups (p. 54) they mention a bunch of normal, herbivorous, Beltway immigration thinktanks, including FAIR, CIS, and ALIPAC, who get called "hate groups" despite not being particularly dissident.

VDARE.com is classed as "White Nationalist"(pp.49-50) for reasons best known to the SPLC. 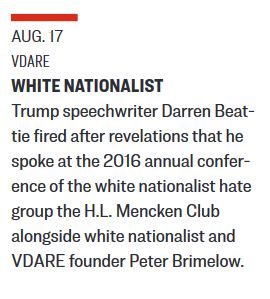 Here's the thing—they say VDARE.com is "headquartered in Warrenton, VA." No, it isn't. A previous foundation was, but for years and years the headquarters of the VDARE Foundation have been in Litchfield, CT, as you can find out from public sources, say, Charity Navigator. Hubert Collins pointed this out last year. The VDARE.com page on the SPLC website says Washington, Conn., which is also wrong.

Charity Navigator doesn't rate us, positive or negative, because they don't rate charities that have less than one million dollars in income a year.

They do rate the SPLC, because it had  $131,815,727 in donations last year, and has, incredibly, $449,834,593 in assets.  Those figures don't include decimal points--that second figure, for assets, is almost half a billion dollars, and it's on track to be half a billion next year, because this year they took in $76 million more than they spent. This is  why we regularly refer to it as the $PLC.

Patrick Cleburne has analyzed the SPLC's finances, most recently in Southern Poverty Law Center ($PLC) Handling Its Loot Even More Strangely, and in  2010, he wrote "The structure of the portfolio looks like it could belong to a retired Goldman Sachs Partner, or possibly a very aggressive Family Office managing the fortune of an ultra-rich clan. There can be very few legal charities with this extraordinary appearance."

So here's my question—if they have all these hundreds of millions of dollars, can't they hire a fact-checker?

Remember that in 2015 even the Anti-Defamation League rival Political Correctness vigilante group complained that the SPLC's Hate list was "wildly inflated."