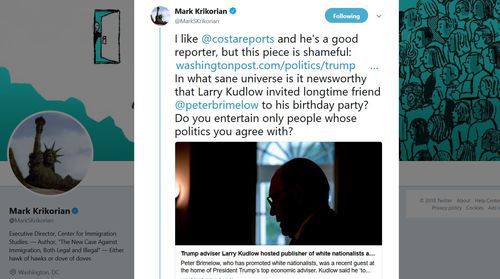 Mark Krikorian On Twitter: "In What Sane Universe Is It Newsworthy That Larry Kudlow Invited Longtime Friend @Peterbrimelow To His Birthday Party??

Thread by @MarkSKrikorian: "I like @costareports and he's a good reporter, but this piece is shameful: washingtonpost.com/politics/trump… In what sane universe is it ne […]"
Which doesn't embed well, so here's a stripped down version using Spooler:

A thread by Mark Krikorian

I like @costareports and he's a good reporter, but this piece is shameful: In what sane universe is it newsworthy that Larry Kudlow invited longtime friend @peterbrimelow to his birthday party? Do you entertain only people whose politics you agree with? (washingtonpost.com/politics/trump…) The idea that appearing in the same room as @peterbrimelow disqualifies you from polite society is pernicious & I'll have no part of it. Now, I've been criticizing his commitment to white identity politics (a fairer description than "white supremacy" or "white nationalism") since

I started in this business. One of the first things I ever wrote at CIS was a review of his book Alien Nation . Last line: "But unease with the simple fact of immigrants' 'brownness' or 'yellowness' just isn't convincing—& distracts attention from the rest (cis.org/Report/Flawed-…) of Brimelow's valuable book" I've never written for his @Vdare site because it's oriented toward white identity politics (though not all the writers share in that) & I reject ethnic identity politics of all stripes (including the Armenian variety) as post-American & subversive of national cohesion. In fact, @peterbrimelow mocks me & CIS for "triangulation", as though our commitment to a robust trans-ethnic American nationalism were merely a pose to get invited to @NRO cruises. That said, neither he nor @vdare traffics in violence or illegality or

Stormfront-style Nazi filth, so I refuse to consider him persona non grata. Years ago, before the Left closed itself off from any debate on immigration, CIS published two across-the-spectrum pubs @peterbrimelow contributed to: See & (cis.org/Report/What-Th…) (cis.org/Report/Bluepri…)

We also include relevant articles from @vdare in the weekly CIS roundup of commentary from all sides, and will continue to do so (much to the chagrin of the SPLC's hate-sniffers). But where I disagree with @peterbrimelow it's because he's wrong, not evil. / fin

Good for him. Krikorian is right, we do nag him about triangulating, but mostly to point out that not being us hasn't saved him and CIS from the attentions of the SPLC.