In case you don't read comic books, you might be surprised to know Captain America is black now. (Also, Thor is apparently a woman, but never mind.) [Subverting Thor, by Gregory Hood, Radix, July 18, 2014]

And now, the new appropriately diverse Captain America is attacking the greatest threat to America's future—opponents of illegal immigration.

The new, progressive Captain America [is] defending illegal aliens against a group of militia members in a new politically-charged version of the legendary comic book franchise released on Wednesday...

In the issue, Captain America beats up members of a white supremacist militia called the Sons of the Serpent as they attempt to apprehend a group of illegal aliens crossing the desert from Mexico into Arizona. 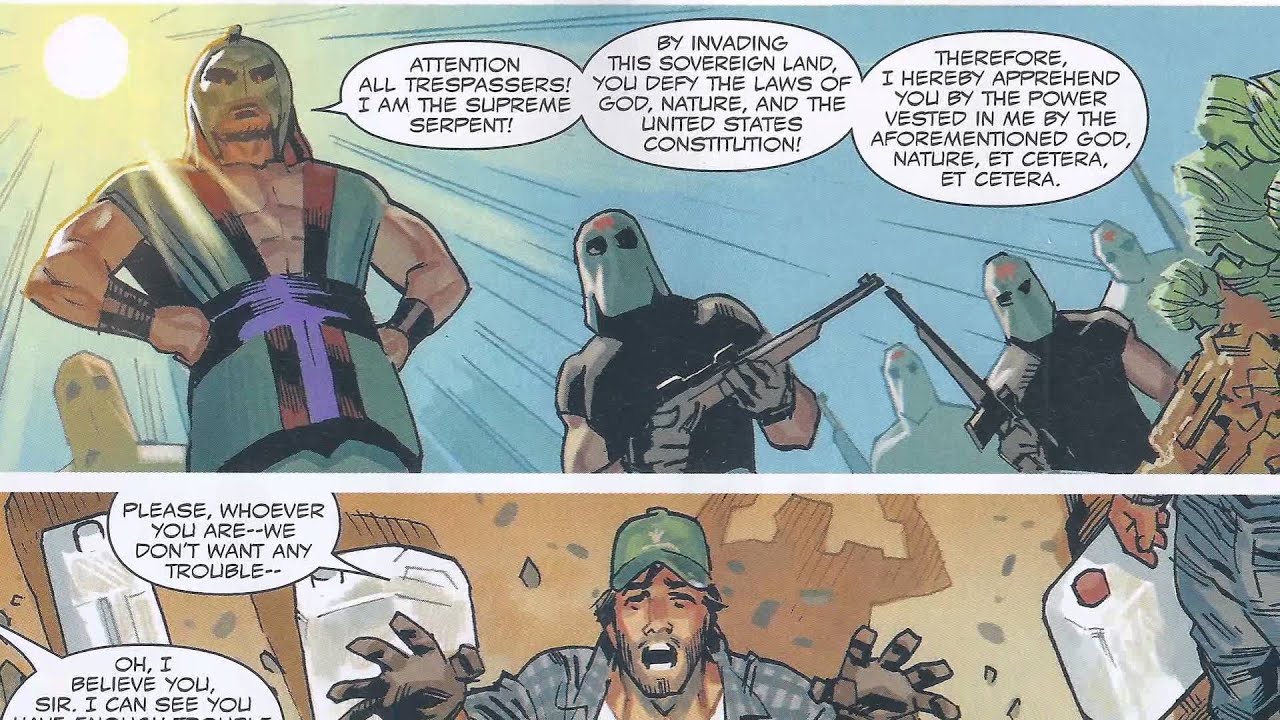 As you've no doubt already guessed, creator Nick Spencer is a hysterical SJW who spends his days being offended Donald Trump is hosting Saturday Night Live. Not surprisingly, the writing is particularly ham-handed.

Somewhere in the distant recesses of the past, I remember vaguely being told journalists were supposed to operate as a check on the government and artists were supposed to aggressively challenge those in power and explore the boundaries of the human experience. However, throughout my life, I've only seen journalists operate as volunteer commissars hunting down dissent and "artists" acting like hysterical children being offended by things and demanding the government leap into action to soothe their rustled jimmies.

The end result is there is less actual art being created and more clumsy agitprop. Comics are particularly vulnerable to this.

It's all very tiresome and obvious. Of course, if real vigilante crime fighters existed, they would find themselves fighting a dreary progression of mostly black and brown, low IQ, underclass criminals, a depressing reality Tom Wolfe satirized. Far better to have mostly white superheroes fighting other white criminals. One might think there would be an interesting story there, as a crime fighting hero is forced to question his actions and the difference between what society tells him and the realities of crime. But it's far easier to have someone fight yet another reincarnation of Adolf Hitler.

The only difference now is comics writers are increasingly trying to artificially diversify comics by making white characters non-white and letting the likes of Ta-Nehisi Coates write stories for characters like "Black Panther." It's simply getting boring.

That said, "Sons of the Serpent" sounds like a pretty cool secret society for immigration patriots, especially if we are dedicated to building "the mighty wall." As I've often argued, the only way to assume pop culture today is to always assume "the bad guy" is right.