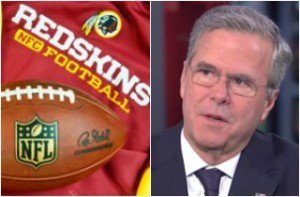 Jeb Bush, who has sunk in the polls, is attempting a desperate tactic.  Jeb is saying something controversial which might get him in trouble with the PC police.

During a town hall meeting in New Hampshire on Wednesday, former Florida governor and current Republican presidential candidate Jeb Bush worked the name debate into a wide-ranging address about domestic and foreign policy and the apparently fiery temperature of the electorate.

“This is not the worst time in American history,” Bush said early in his speech. “This is not the time to have people come and feed your angst or feed your anger. There’s a legitimate reason why people are angry. Look at Washington, D.C. You know, I was asked on a sports talk show, I was asked my views on the Washington Redskins. And I said look, you know, there’s a lot of big pressing problems here; I don’t think we need to be so politically correct, and try to, through government, take the name Redskins off. If that’s what they want, leave them alone, for crying out loud. Let’s worry about the complicated nature of our regulations and taxes and other things.

“And the Left went crazy, as you might expect, because they are a little more politically correct these days. And someone sent me an e-mail and said ‘Jeb, the term Redskins isn’t the pejorative; it’s Washington that’s the pejorative.’ If they’re going to change their name, I don’t know what you’d call it, Northern Virginia Redskins or something like that.”

This last part was, of course, greeted with whoops and cheers.

That's  bold Jeb.   For your next step, how about calling for an end to Hispandering?

This is at least the third time Bush has made the same joke in the past two weeks. During a radio interview with Hugh Hewitt last week, Bush was asked about media coverage of the so-called chaos afflicting House Republicans.

And in an interview with Fox Sports 1’s Clay Travis, Bush was asked about the response to his original comments backing the Redskins name.

“Someone sent me an email saying you got it wrong,” Bush said, via Politico. “In the term Washington Redskins, the part of that that’s bad is Washington. I thought, well that’s a better answer, actually. People disparage Washington, D.C., because of its dysfunction. And I just think private businesses ought to be left alone. You know, having trademark lawsuits, having the federal government get involved in this for political correctness purposes. People’s views on these things evolve. Let it happen naturally, organically.”

Now, for the all-important question, "How will this help Jeb with the Hispanic Vote?"  I think it's a non-issue with them.

In Mexico, with the world's second-largest NFL fanbase, it's not a big issue.  There, the Redskins are also called the Pieles Rojas. Here is an article from Mexico's Excelsior about Robert Griffin III, and you can see Pieles Rojas in the title.

Not only that, but there was a university fútbol americano team in Mexico with the name Pieles Rojas, which, however, was shut down for economic reasons in 2005.