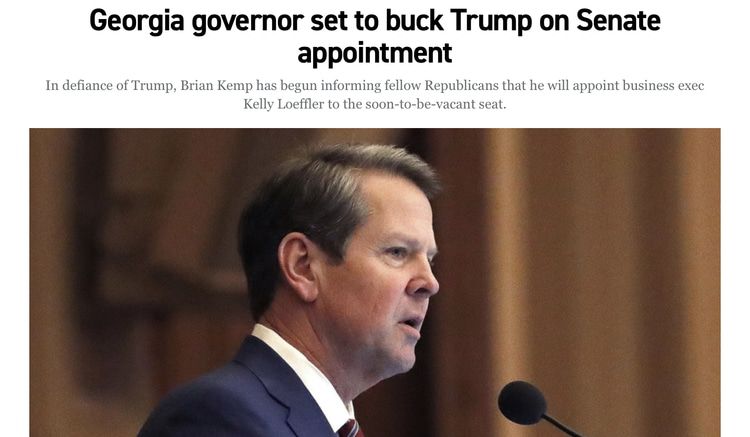 Should Immigration Patriots Be Worried About The Bizarre Georgia Senate Appointment?

Collins is a strong Trump defender and pretty solid on immigration. He has an A- career rating from NumbersUSA and was one of the few House Republicans to oppose the insidious Fairness for High-Skilled Immigrants Act. He has a high media profile, terrific conservative credentials, and extensive political experience. He would certainly be an improvement over the squishy Isakson.

Loeffler, by contrast, is a political novice with questionable credentials. She is part owner of a WNBA team, which is a league that supports numerous liberal causes. Conservatives view her as a liberal. [Conservatives warn of ‘setback’ if WNBA owner put in Georgia Senate seat, by Paul Bedard, Washington Examiner, November 27, 2019] As a businesswoman and prominent GOP donor, it’s likely she supports a Business First mindset instead of America First priorities. It also makes no sense to elevate an untested businesswoman to such an important position.

Her allies say she is actually a strong conservative who supports the President’s immigration agenda. “[Loeffler]’s a proponent of the second amendment. She was very tough on illegal immigration. So she would check some of those boxes with the president,” Phil Kent, an adviser to ProEnglish, told local media. [Who Is Kelly Loeffler, Rumored A Likely Senate Pick?, by Emma Hurt, WABE, November 27, 2019]

Kemp’s purpose in appointing Loeffler is to appeal to suburban women, a demographic that has soured on Trump’s GOP. It isn’t clear how this one appointment may reverse that trend.

Trump allies are threatening Kemp with a primary in 2022. If Trump stays in office, this is a very serious threat. Kemp won election by touting himself as a Trump supporter and an immigration hawk. He needs Trump world’s support to stay governor.

This ugly situation won’t be resolved with an appointment. A special election is scheduled for 2020 and Collins is likely to run. Loeffler won’t stand a chance if Trump backs the congressman.

However the situation resolves itself, it’s not good that Republican governors defy the president’s wishes.