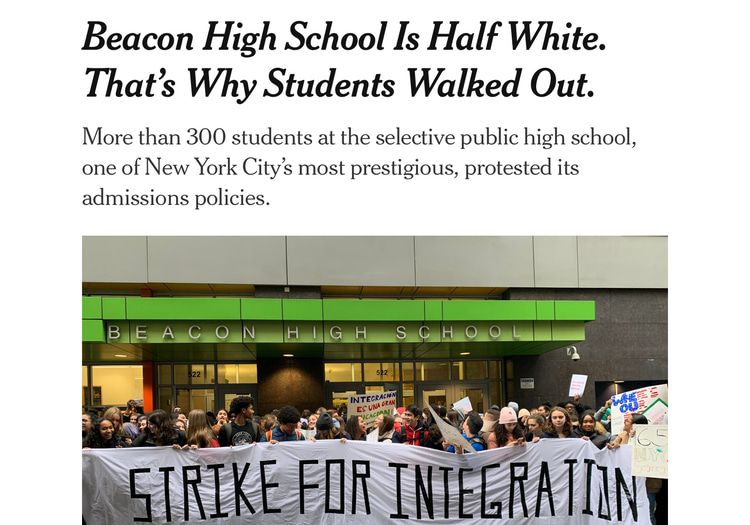 A Public School That Is 47% White Is Denounced as "Segregated"

Beacon High School Is Half White. That’s Why Students Walked Out.

More than 300 students at the selective public high school, one of New York City’s most prestigious, protested its admissions policies.

Naia Timmons, a junior from Harlem, stood surrounded by classmates in the middle of the street outside Beacon High School as hail began to fall.

She shouted into a bullhorn: “I continue to recognize the privilege I had of escaping the system that many of my friends could not.” Naia identifies as black and white.

Her classmates chanted “End Jim Crow” and “Education is a right, not just for the rich and white.”

Roughly 300 students walked out of Beacon on Monday to protest its high-stakes admissions process, which they said has exacerbated segregation in the nation’s largest school system.

The protest at Beacon, one of New York City’s most selective public schools, illustrates the widening scope of the push for school integration. It has shifted away from the narrow issue of how few black and Hispanic students are admitted to the city’s eight specialized high schools, including Stuyvesant.

Beacon’s student population is about half white, a striking anomaly in a public school system that is nearly 70 percent black and Hispanic.

Here are the official stats from the NYC school district for Beacon, which is at 544 W. 44th St. in Hell’s Kitchen, near Times Square:

So, whites are a minority at Beacon, which is an interesting Current Year definition of “segregation.” But clearly, the school is Taking Steps to keep kids who can’t speak English or who are retarded out of the school.

Beacon is not a specialized high school — it has no admissions test — but its highly competitive admissions process requires students to assemble a portfolio of middle school work, admissions essays and high standardized test scores and grades. It is one of the most selective schools in New York: Last year, there were over 5,800 applications for 360 ninth-grade seats.

The high school, in Hell’s Kitchen, Manhattan, is now at the center of a push for large-scale desegregation that Mr. de Blasio’s administration has not endorsed. …

A panel commissioned by Mr. de Blasio to study desegregation policies recommended that the city not open any new screened high schools and eliminate most academic screens for middle school admissions.

But Sadie [Lee] also said that she sometimes felt isolated at the school, which was about 9 percent Asian last year. She had exclusively white teachers last year. Sometimes people at the school confused her with another Asian-American girl in one of her classes, she said. Sometimes she was asked where she was from and whether she spoke Chinese.

Someday, she fears, somebody will ask to touch her hair.

“Racism hides itself behind our progressive facade,” Sadie said during Monday’s protest. “The fight does not end when we walk back into that building,” she added.