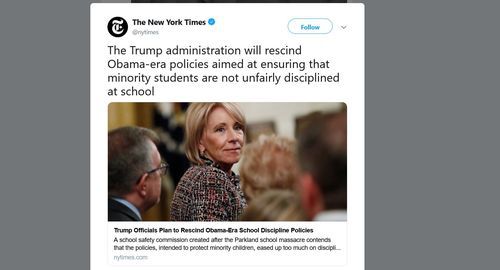 WASHINGTON — The Trump administration is planning to roll back Obama-era policies aimed at ensuring that minority children are not unfairly disciplined, arguing that the efforts have eased up on punishment and contributed to rising violence in the nation’s schools, according to documents obtained by The New York Times.

The Education and Justice Departments plan to send a joint letter this week announcing the rescinding of policy statements dating to 2014, according to a draft letter signed by Kenneth L. Marcus, the Education Department’s head of civil rights, and Eric S. Dreiband, assistant attorney general for civil rights.

The 2014 Obama policy advised schools on how to dole out discipline in a nondiscriminatory manner and examine education data to look for racial disparities that could flag a federal civil rights violation. Though the guidance is nonbinding, critics have argued that the edict pressured districts to keep suspensions low at the expense of student safety.

This is a classic Late Obama Age Collapse policy. Did anybody ever ask Obama if he believed his own Administration that the problem in the public schools was too much discipline? Not that Obama ever sent his kids anywhere near a public school …

The commission’s report argues in favor of narrowing a legal avenue for the federal government to combat discrimination in the nation’s schools by rejecting “disparate impact theory,” which holds that seemingly neutral policies can harm certain racial groups. That was the underpinning for the Obama administration’s disciplinary policies.

Instead, the panel will hold, the administration will act on evidence of explicit discrimination, not just statistics that indicate one group may be failing or falling behind. …

The report referred to two Supreme Court rulings, one in 1978 and another in 2001, that affirmed that Title VI extended only to intentional discrimination.

In undermining court rulings, the commission said the Obama administration “gave schools a perverse incentive to make discipline rates proportional to enrollment figures, regardless of the appropriateness of discipline for any specific instance of misconduct.”

The Obama-era guidelines were released when federal data showed that black students were three times as likely to be suspended or expelled, and black and Hispanic students made up more than half of the nation’s school-related arrests and referrals. In the nearly half-decade since the guidelines were issued, those numbers have not improved.

Obama administration officials wrote in 2014 that discipline rates may be caused by a range of factors but that they could not be explained solely “by more frequent or more serious misbehavior by students of color.”

“In short, racial discrimination in school discipline is a real problem,” they wrote.

According to the McArdle Rule, we may ask if it’s OK to ask if there might be some other reason than systemic white racism for why blacks and Hispanics get caught misbehaving more, but it’s Not OK to ask.