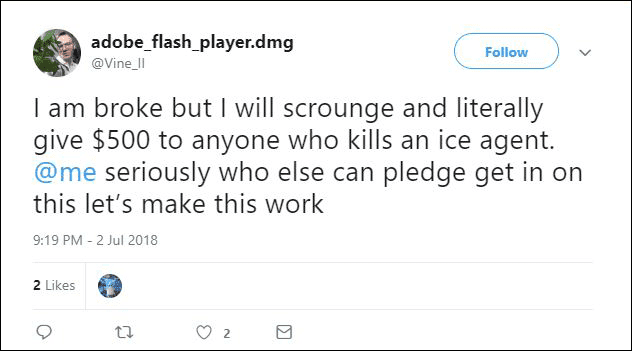 Sam Francis Predicted It All: Offering Money To Kill ICE Officers To Be Murdered Is Free Speech

Sam Francis said multiculturalism, by its very nature, must lead to anarcho-tyranny. He wrote:

We see the drift in this country [towards authoritarianism], with the Patriot Act and its spawn at airports and in random searches of law-abiding citizens—all because our own overclass will not enforce standing laws against illegal immigration and does nothing to halt the transformation of American society by millions of aliens.

Unwilling to control immigration and the cultural disintegration it causes, the authorities instead control the law-abiding.

This is precisely the bizarre system of misrule I have elsewhere described as "anarcho-tyranny"—we refuse to control real criminals (that's the anarchy) so we control the innocent (that's the tyranny).

And now, there is yet another example. In New York, a man who tweeted an offer $500 to anyone willing to kill an ICE officer was acquitted.

The case against Brandon Ziobrowski, 35, centered on whether a threatening social media post is protected speech under the First Amendment.

A federal jury in Boston cleared Ziobrowski of using interstate and foreign commerce to transmit a threat after a week of testimony. He had faced up to five years in prison and a $250,000 fine if convicted…

Ziobrowski lived in Cambridge, Mass., at the time of the threat last year.

“I am broke but will scrounge and literally give $500 to anyone who kills an ice agent," he tweeted to his 400 followers in July 2018. "@me seriously who else can pledge get in on this let’s make this work.”

“Thank you ICE for putting your lives on the line and hopefully dying I guess so there’s less of you?” he wrote, according to court documents. He also tweeted about wanting to kill then-Republican Sen. John McCain, who died in August 2018.

In contrast, just a few months ago, New York City said even using the term “illegal alien” or threatening to call ICE to, you know, enforce the law, would be illegal.

New York City's Commission on Human Rights announced on Thursday that residents could face up to $250,000 in fines if they use terms such as "illegal alien ... with intent to demean, humiliate or harass a person."

"Hate has no place here," a tweet from the City of New York read. The city's announcement ticked off a list of offensive ways to address immigrants -- including threatening to call Immigration and Customs Enforcement (ICE), or harassing someone for their "limited English proficiency."

"Threatening to call ICE when motivated by discrimination, derogatory use of the term 'illegal alien,' and discrimination based on limited English proficiency are unlawful discriminatory treatment under the NYC Human Rights Law," the announcement read.

This may seem like it makes no sense. How can explicitly calling for death be “protected speech” while calling for law enforcement be illegal? The answer is that in a multicultural society, there is no agreed upon-definition of “law.” It’s simply background noise for the competition of different ethnic groups. The ethnic groups that display the most solidarity win. Claiming “oppression” or “discrimination” is a power play, not an argument made in good faith. Unfortunately, it’s a gambit that naïve, high-trust, founding stock Americans keep falling for over and over again.

Sam Francis predicted it all. Many years after his death, he becomes more and more relevant. The invaluable Tom Piatak has an absolute must-read on Francis, A Giant Beset By Pygmies.

Recent events continue to vindicate Francis’ insights. There is an unmistakable pattern in contemporary politics: any politician who challenges globalism will be subject to unremitting attack, the legitimacy of his rule will be emphatically denied, and every effort will be made to prevent those who voted to challenge globalism from having their votes accepted as legitimate. Indeed, it is clear that, in elite discourse, “democracy” means a political system producing results that are congenial to elites. Hence, the failure to implement Brexit in Britain; the formation of a new government in Italy, after the intervention of France and Germany, to displace the one led by populist Matteo Salvini; and the persistent efforts to sanction the governments of Poland and Hungary, both of which enjoy strong popular support; not to mention the repeated attempts to remove Donald Trump from office.

Someone who agrees with Francis that politics is about power, that elites see globalization as benefitting them, and that opposition to globalism is therefore seen by elites as a grave threat, will have no trouble making sense of these developments. Those who don’t are instead likely to be confused and easily manipulated. The disastrous impact of those bad ideas teaches a lesson which Francis foresaw: the real threat to our country comes from our elites, and not from outsiders who sometimes embrace unpopular ideas. The elites generate the ideas that most people in positions of influence are too timid to resist, lest they too be “purged and marginalized.”

Make sure to read the whole thing. When you look at today's madness, just remember that Sam Francis predicted it all.