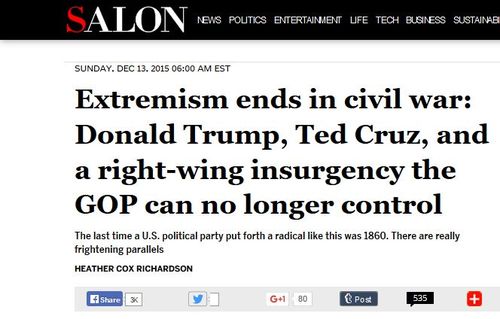 I mean, I know. It's Salon, it's almost too easy. But still.

The rise of dictators-in-waiting Donald Trump and Sen. Ted Cruz has left political observers bewildered. How did the establishment wing of a dominant American political party end up with a radical extremist carrying the party’s banner? Will the Republican Party split and die? More important, how will this crisis play out for the nation?

Catch that there? Not only Donald Trump, but now Ted Cruz is a "dictator in waiting?" How? What does this even mean? After all, it's the current President of the United States who seems to be the one governing by fiat.

And what "bewildered" political observers? We've been waiting for this for years. Peter Brimelow was practically John the Baptist in predicting the rise of Trump. "All it would take to get this issue into politics is one speech..."

Never mind. Richardson tells us Southern Democrats, in response to the rise of anti-slavery rhetoric and the Republican Party, escalated their rhetoric to the point where the Democrats could no longer contain it. As a result John C. Breckinridge became the candidate of the "extremists," and when Abraham Lincoln won the election of 1860, Richardson tells us what happened next.

But those men had never experienced a war and had no idea what they were signing up for. They launched a war that looked nothing like the one Breckinridge’s men had promised. Rather than being a romp that reinforced white southern dominance, the American Civil War took 620,000 American lives and left the South shattered.

Uh huh. And what does this have to do with, well, anything?

Today the parties have swapped sides, but the pattern is the same. Once again, political leaders have for years used  inflammatory rhetoric to bolster a system that  favors the very wealthy. Once again, their rhetoric has created an insurgency that they cannot control. Once again, that insurgency appeals  to Americans who have never actually had to grapple with what it might mean to fight for an ideology.

Several points. But there's one finally thing of all of this. Like Lindsey Graham when he's trying to act like a butch Commander in Chief, it's hard to take a leftist, from Salon of all places, invoking the specter of a civil war that American right wingers will somehow lose. It's the right-wingers who have all the guns and love training with them.

And for some reason, it's the leftists who keep making veiled threats of violence and war, usually from their "safe spaces" where they are protected against speech they disagree with. If they get their war, what do they think is going to happen? 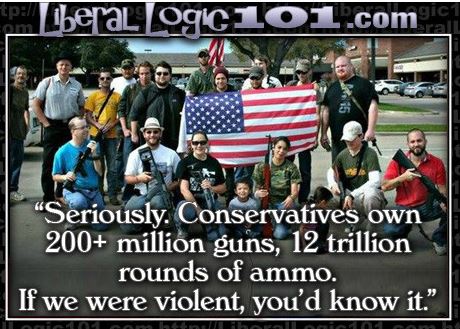