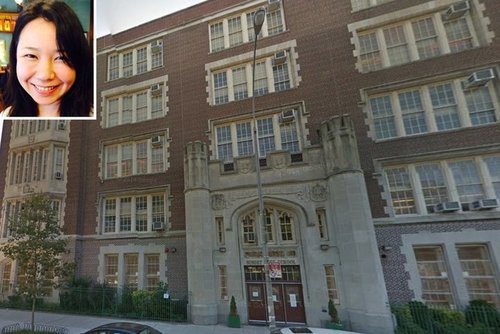 Assimilation, Pearl Harbor, And The Korean Immigrant Principal Who Banned Christmas (and The Pledge of Allegiance)

When posting the Eugene Gant  item below [Korean Principal Bans Christmas, Thanksgiving, And The Pledge Of Allegiance At PS 169 In Brooklyn] I didn't bother to check if the PS 169 Principal Eujin Jaela Kim was actually from Korea. While it's considered very wrong to refer to a Mexican-American as a Mexican, or a Japanese-American as Japanese,  assimilation has failed so badly that many minorities think of themselves as Korean or whatever first.

In the 1940s, American schools in Hawaii had Thanksgiving, with the story of the Pilgrim Fathers, Christmas plays, and the Pledge of Allegiance every morning. History books were written, and history  taught, from the American point of view. When  first-generation Japanese-American Daniel Inouye, aged 17, saw the Japanese bombers attacking Pearl Harbor on December 7, 1941, he rode his bicycle to the first aid station to volunteer to help the wounded. As he rode, he  looked up to the skies and screamed, "You dirty Japs!" [CNN, May 8, 2003] That's assimilation. (Note that he was named Daniel and not Miyamoto or something. ) See December 7th, September 11th And Immigrant Assimilation, by Lance Izumi, published on VDARE.com after 9/11.

So I could believe that a Korean American named Eujin Jaela Kim could have gone through the reverse of that assimilation process.

In fact, she is an immigrant from Korea—Zoominfo has a cached page saying

"Eujin Jaela Kim (Jaela) was born in Seoul, South Korea. Jaela attended Boston College for her undergraduate studies in English and Long Island University for her graduate studies in TEOSL. Jaela began teaching in 2001 and is currently teaching at P.S. 126/Manhattan Academy of Technology located on the Lower East Side of Manhattan. She is teaching 4th-8th grade ESL as a pull-out, push-in teacher and coordinates all the admitting, testing, and data analysis for the English Language Learners. Jaela began her career teaching in a self-contained first-grade classroom at P.S. 105, a Chinese/English-bilingual ESL K-5 school in Brooklyn.. Jaela has developed and led workshops and seminars for teachers in New York City as well as for teachers in Seoul Korea, where she has established summer programs and edited ESL textbooks. Jaela is striving to understand and apply Genre Practice to bring her English Language Learners out of the shadows into the community of the mainstream classroom."

It's based on that kind of background that Kim decided to cancel Christmas, Thanksgiving, and the Pledge of Allegiance for a school that's 95 percent Hispanic and Asian. (She's since climbed down under massive pressure—none of the conservative media reports referred to her as Korean.)

Daniel Inouye volunteered for the war in Europe and won the Medal of Honor, Later he was a Senator from Hawaii. Are any first-generation immigrants likely to behave the same way? Not if they're educated at PS 1691