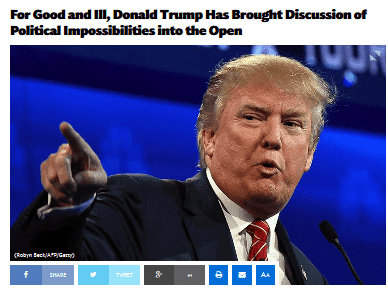 But NR kinda sorta wishes someone else had done so.

To be clear, this change is occurring both for good and for ill. The shattering of the window reflects the shattering of the American consensus, and the result will likely be deeper polarization, and even less civility, with further strains on the ties that bind our nation together. At the same time, however, the Left’s very success at defining the terms of discourse meant that the price of civility and unity was all too often an acceptance of liberal norms and manners. It meant swallowing liberal pieties and confining your discourse to Left-approved terms. In other words, it often meant surrender.

The marketplace of ideas is getting raucous indeed. What’s a person to do? As I wrote yesterday, now is the time to speak with informed conviction, apathetic to the demands both of political correctness and the mindless reactions against PC. Use the new-found room in the public discourse to speak your mind, but at the same time model the values you wish to see in others. In the new free-for-all, the Golden Rule still matters, reason still matters, and attitude is not everything. Trump should not rule the world he has made. [Links in original, emphasis added]

For Good and Ill, Donald Trump Has Brought Discussion of Political Impossibilities into the Open, NR, December 8, 2015

NR had better be prepared for Trump to rule it, because that may very well happen. Another terror attack before the GOP convention in August may doom the elites trying to destroy Trump. But even without one, the natives are restless and pounding the war drums.

Another thought. If Trump, by some outside chance, wins the nod, a terror attack before Nov. 8 likely dooms Hillary Clinton.

But back to Overton. Ace of Spades explains why he is not just popular but beating the other GOP candidates. Trump breaks leftist taboos by not debating on leftist terms:

It is interesting to note that one effect of this leftist-mediated "discourse" is that conservatives generally only argue in a single (permitted) mode: We can argue that our proposals achieve the priorities of the leftist socialist state better than the proposals of the left can achieve them.

We argue that our policies can better achieve the left's priorities — but it's much rarer to hear the right object to the left's prioritization of wants. That only happens on certain touchstone issues (notably, cultural issues like guns, abortion, and gay marriage, where the difference between the left and right position cannot just be split in half).

By and large, we're forced to debate on the left's terms, and that means we're always proposing counter-proposals to achieve the left's priorities. ...

I have bad news for people, and maybe the country: There is no way to stop Trump until "respectable" politicians begin to understand why he's winning and begin destroying the Legacy Failure of leftist mediated political thought themselves.

People keep talking about "When he loses." Listen to me: He is not going to lose. Not on the current trajectory, he won't.

Trump is setting loose passions — some useful, some vital, and some demonic and destructive — and people find it liberating to think freely for once in forever.

You can't beat that by offering rhetorical pablum like "I'm willing to say 'Radical Islamic Jihad.'" Well bully for you, and who the hell cares? The fetish with this phrase is a rhetorical stunt designed to convince the listener that the speaker has a Bold Apologetic Plan for Destroying Terrorism, while masking the fact that the ideas being proposed are basically Obama's, plus more bombing.

Trump is not going to "lose" — passive voice. Someone will have to actually beat Trump, and no one's going to beat him by simply regurgitating the leftist-enforced Polite Company Conservative line. [David French: Trump and the Overton Window, December 9, 2015]