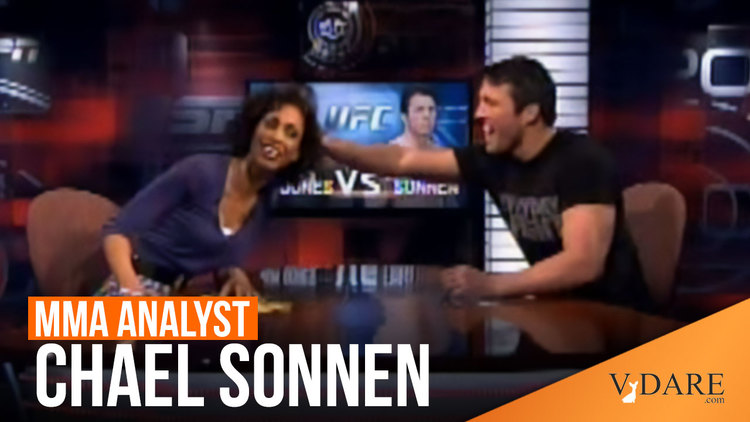 Sailer: We Have Found A Hair-Touching Video!

Earlier By Steve Sailer: Where Are The Hair-Touching Videos?

The nation’s op-ed pages have been in an uproar for years over the epidemic of hair-touching that the White Patriarchy imposes on BIPoC women. Strangely, however, there seems to be less video of this presumably common occurrence than there is of Navy video of UFOs.

But now the collective might of the iSteve readership appears to have found Video Proof. An anonymous iSteve commenter points out this tape of what appears to be hype for an upcoming MMA fight:

The pretty black interviewess doesn’t seem terribly non-plussed when the handsome, self-confident white professional fighter asks to touch her hair. So, guys, if you want to be touch the hair of black women you meet and have them laugh girlishly over it, all it takes is to be enough of a he-man that you get signed to fight Jon Jones.

And of course this video I previously posted:

But where are the Biden hair-touching videos? Does the President discriminate against touching black hair?