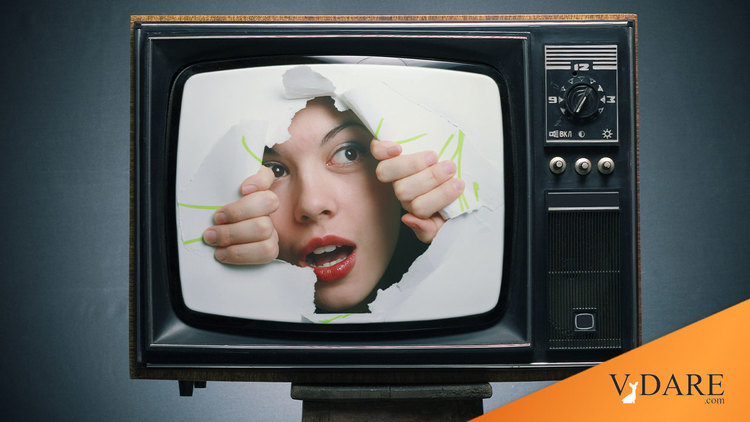 Over at Marginal Revolution, Tyler Cowen has been on a kick lately about how our culture has gotten more feminized over the decades. He quotes  percipient 1990s observer Kathryn Robinson:

Hang around the zeitgeist long enough and a pattern will emerge. You flip on the TV and there’s a young woman announcing that Eagle Hardware is her social life. Change the station and see the newest Nike ad: no more the command to Just Do It, but now a ringing paean to self-esteem: I Can. Maybe another station will be broadcasting OlympicGames human-interest stories; maybe the winning American wrestler will be weeping lavishly.

… You log on to the Internet where designer Donna Karan reports that the top fashion trends are not wide lapels or sheer skirts, but “Compassion. Caring. Embracing.” …

You wonder when we all became female.

If you cast a critical eye backward, you will see that it’s happened over the last three decades, in a shift as gradual and inevitable as the changing tide, surging over everything from business, education, and religion to politics, fashion, and interpersonal relations. One of the great cultural revolutions of our time, it’s also been as invisible as the air we breathe, shifting the default position of our behavior to “feminine” as imperceptibly as our evolution toward light eating, self-empowerment, and public intimacy…

My impression is that WASP America had been headed in a feminist direction, as seen by 1919’s passage of women’s suffrage and prohibition. But prohibition proved so unpopular with America’s hard-drinking rising artistic/critical/entertainment elite (e.g., Hemingway, Mencken, W.C. Fields, etc etc) and especially among new immigrant groups targeted by WASP feminism, that feminism fell out of fashion for 50 years.

Meanwhile, however, the rise of media paid for by advertising, such as radio and television soap operas, began to extend female tastes and values from the lesser reaches of the media.

I started working in marketing research in 1982. Women had been the main target of television advertising for decades because females spend more money at retail than males do (often spending it on their male loved ones). In an advertising driven world, this fundamental logic tends over time to revolutionize social attitudes in the direction of those that appeal most to moms who control the family shopping.

The spread of cable television in the later 20th Century might have slowed this trend toward our culture coming to be dominated by women’s tastes due to women spending more money than men spend. Subscription-driven HBO, the most prestigious cable channel, for example, was very much a guy’s channel (e.g., boxing, The Sopranos), other than Sex and the City.

I used to watch an HBO sports satire sitcom called Arliss that never got very good ratings. It was modeled on The Larry Sanders Show in which celebrity actors played themselves as guests on Gary Shandling’s fictional talk show. One problem with Arliss was that real life jocks aren’t as good at playing themselves as are real life actors. But the sit-com parts were a funny satire on 1990s big money sports.

But every year when the head of HBO was about to cancel Arliss due to low ratings, he’d get flooded on his private number with threats from his fellow media industry alpha males like Tom Brokaw that they’d cancel their subscriptions if he canceled Arliss. So it limped along for years. If Arliss premiered in 2021, of course, it would be taken off the air midway through the first episode and replaced with a Robin DiAngelo training film.

But then the rise of advertising-driven Internet media (e.g., Facebook) in this century renewed the trend toward a female-oriented media environment.

On the other hand, as paywalls have gone up on the Internet, returning the subscription model, this has had a less liberatory impact on the media world because by now virtually every media business has hired huge numbers of poorly paid young women. This wouldn’t be so bad except that the rise of sexual harassment allegations as Sacred Writ from the time of Anita Hill has empowered virtually every young or ex-young woman who worked at a media outlet or political office to threaten to blackmail male bosses with #MeToo allegations. In our Neo-Victorian mindset, if a older alpha male has ever responded to more than one young woman workers’ preening and flirting in his flustering presence with a leer (without eventually putting a ring on it), he can have his career canceled. And because most men in power in media and politics are a man like any other man, only more so, practically every media firm

This gives youngish women huge amounts of power over media organizations to blackmail them into, say, running Let’s-Talk-About-My-Hair ruminations and the like.