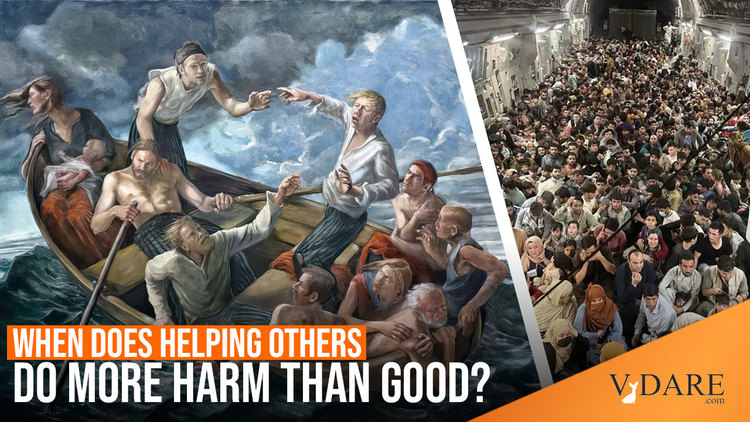 Earlier by John Derbyshire: Lifeboat Ethics—Baltimore And The Mediterranean

Those great crowds of Afghans trying to get into Kabul airport of course make a very pathetic sight. It may sound a callous thing to say, but it's probably a sight we should get used to.

Afghan refugees are by no means a new thing. After the Soviets left and their puppet government, three years later, finally collapsed, Afghanistan underwent a nasty spell of tribal warfare all through the mid-1990s. The Taliban took control in 1996; but their policies, together with a major drought, drove untold numbers of Afghans out.

Well, not altogether untold. According to OCHA, the U.N. humanitarian agency: “At the end of 2000, some 3.6 million Afghans were living as refugees in other countries.”

That, to remind you, was twenty-one years ago—before 9/11. Most of that 3.6 million were in Pakistan and Iran; but Europe got a share, and so did we. There's nothing new about Afghan refugees.

Why is there nothing new about them? Well, here are some more numbers for you.

Population of Afghanistan: 37½ million, ranked in between Morocco and Canada. Total Fertility Rate: 4.72, tied with Guinea-Bissau in the world rankings, between Nigeria and Liberia. There are 28 nations with Total Fertility Rate greater than four: only two of them are not in sub-Saharan Africa. (The other one, if you're curious, is Timor-Leste, a tiny breakaway bit of Indonesia.)

So Afghanistan is pretty populous and very seriously philoprogenitive. That's why I'm telling you that scenes like the ones we've been seeing at Kabul airport are something we should get used to.

There are many, many nations just as tribal as Afghanistan, and most of them are poor, ungovernable, fertile, and susceptible to climatic disasters. Probably later in this decade, and certainly no later than the next decade, the desire of these nations' people to get out of their poop-hole countries into the prosperity and security of the civilized world, will be the major issue in international affairs.

Their numbers won't be in the thousands and tens of thousands, as we are hearing in regard to Afghanistan. They will be in the millions and tens of millions—staring out at us pitifully from our screens, clamoring to get on a plane, any plane, out of their corrupt, starving hell-holes.

That's why I'm telling you we'd better get used to the sight. Although if, as is likely the case, fertility is the main push factor, the faces of those people will differ in one key respect from Afghan faces—they’ll be black.

So … If you think I'm being cold-hearted about these refugees, stick around. While you're waiting, feel free to look up references to the phrase "lifeboat ethics."