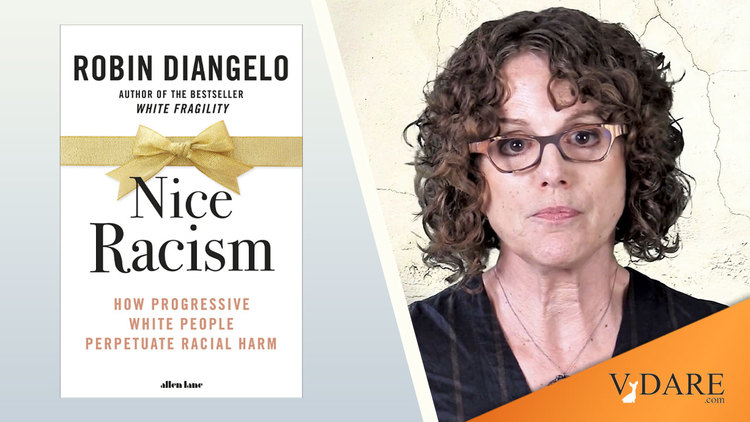 Matt Taibbi On Robin DiAngelo:  "Is There A Worse Idea Than Suggesting—Demanding—That People Get In Touch With Their White Identity?"

Matt Taibbi has a new Substack piece (subscriber only) on Robin DiAngelo's second book, Nice Racism, which, he reports, breaks no new ground [Our Endless Dinner With Robin DiAngelo, TKNews, June 30, 2021]. That ground being, creepy, cult-like anti-whitism which nets DiAngelo a lot of cash.

Taibbi starts with juxtaposed quotes from DiAngelo and Richard Spencer both decrying individualism.

But for all Taibbi's hilarious prose, he doesn't give us anything more original than yet another flabby National Review piece about the evils of identity politics.

From the Substack piece:

Nice Racism’s central message is that it’s a necessity to stop white people from seeing themselves as distinct people. “Insisting that each white person is different from every other white person,” DiAngelo writes, “enables us to distance ourselves from the actions of other white people.” She doesn’t see, or maybe she does, where this logic leads. If you tell people to abandon their individual identities and think of themselves as a group, they sooner or later will start to behave as a group. Short of something like selling anthrax spores or encouraging people to explore sexual feelings toward nine year-olds, is there a worse idea than suggesting — demanding — that people get in touch with their white identity?

Yes.  It's the one we have now:  encouraging everyone else's group identity, denying whites theirs, and watching the chaos ensue.

Only when every race is "in touch" with their group identity can we start talking about extricating ourselves from the Present Mess.

I'm amused by this notion that "white identity" is like dad's box of Playboys in the attic, and that if the boys find it, they'll start thinking unclean thoughts, and it's up to us to keep the attic door locked.