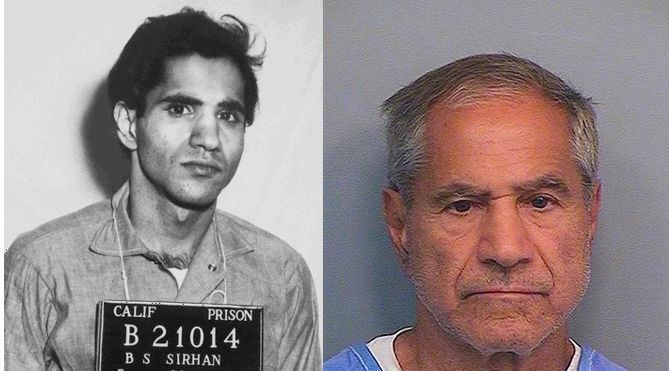 Gov. Gavin Newsom, who is campaigning to win a recall election in California, can choose to uphold or reject the recommendation, which would free Mr. Sirhan after more than five decades.

California parole commissioners recommended on Friday that Sirhan B. Sirhan should be freed on parole after spending more than 50 years in prison for assassinating Robert F. Kennedy during his campaign for president.

The recommendation from the two commissioners does not necessarily mean Mr. Sirhan, 77, will walk free, but it most likely puts his fate in the hands of Gov. Gavin Newsom, a Democrat facing a recall election that will determine his political future. A spokeswoman for Mr. Newsom declined to say whether he would approve the recommendation, only that he would consider the case after it is reviewed by the parole board’s lawyers. …

The decision to grant parole will first be reviewed by the legal division of the Board of Parole Hearings, a process that can take up to about four months. If the lawyers find an error, they can send the case to the full slate of commissioners to review.

In several instances, Mr. Newsom has denied parole to people whom the parole board has urged him to release, including two followers of the notorious cult leader Charles Manson, most recently in June.

That can take up to four months, so it sounds like Newsom is stalling until after the election. Perhaps some crack reporter could ask the Governor about Sirhan?

The parole hearing was the 16th time Mr. Sirhan had faced parole board commissioners, but it was the first time no prosecutor showed up to argue for his continued imprisonment. George Gascón, the progressive and divisive Los Angeles County district attorney who was elected last year, has made it a policy for prosecutors not to attend parole hearings, saying the parole board has all the facts it needs to make an informed decision.

At the hearing, which was conducted virtually because of the coronavirus pandemic, Mr. Sirhan said he had little memory of the assassination itself, but he said he “must have” brought the gun to the scene. …

Mr. Sirhan, who is Palestinian and was born in Jerusalem, said in a television interview from prison in 1989 that he had killed Kennedy because he felt betrayed by the senator’s proposal during the campaign to send 50 military planes to Israel....

Many of the questions at the hearing focused on the Israeli-Palestinian conflict, and Mr. Sirhan at one point began crying when he spoke about refugees suffering in the Middle East.

“Whatever I would want to do in the future, it would be towards resolving that peacefully,” he said, but he also added that he wanted to “disengage” from the conflict because he was too old.

An odd coalition has urged prison officials to release Mr. Sirhan over the years, including those who say Mr. Sirhan has served his time and others who believe he is not the real assassin.

The NYT is much less enthusiastic about RFK assassination conspiracy theorizing than the Washington Post.

Though several investigations have determined that Mr. Sirhan was the lone gunman, and Mr. Sirhan has said the same, some have pursued a conspiracy theory that claims there was a different killer, citing what many say was a sloppy police investigation and varying theories about how many shots were fired and what the ballistic evidence shows.

Two of Robert F. Kennedy’s children have said they support another investigation, including Robert F. Kennedy Jr., who has become a prominent promoter of misleading information about vaccines. He has said he thinks Mr. Sirhan is innocent.

Paul Schrade, a labor organizer who worked on Kennedy’s campaign in 1968 and was one of the several bystanders shot during the assassination, recorded a video that was played for the parole commissioners on Friday, urging Mr. Sirhan’s release based on the theory that he is innocent.

I have to say that this is just about the Worst.Conspiracy.Theory.Ever.

I mean, it’s by no means impossible that Sirhan managed to miss RFK while shooting all those other people right next to RFK, and perhaps RFK was actually fatally shot by, say, the security guard standing behind him while trying to shoot Sirhan to stop him from shooting.

If the latter is true, Sirhan is the textbook case of felony murder: you go to the candidate’s victory party and start blasting away at him and the candidate accidentally gets shot by a panicked guard who is trying to shoot you to make you stop. You are not innocent just because you are a bad shot. You are guilty.

This still might be interesting if it could be tied into a demonically sophisticated conspiracy theory involving a Second Gunman.

But if you were an expert CIA operative drawing up the Plan for Sirhan to create a diversion, wouldn’t you have your crack marksman shoot RFK from further away, where nobody is looking, not closer to the Man of the Hour and Center of Attention?

Furthermore, what trained assassin would volunteer for the job of standing right behind the candidate while Sirhan blasts away in his direction? Six people were struck that night; the Second Gunman easily could have been one of them. 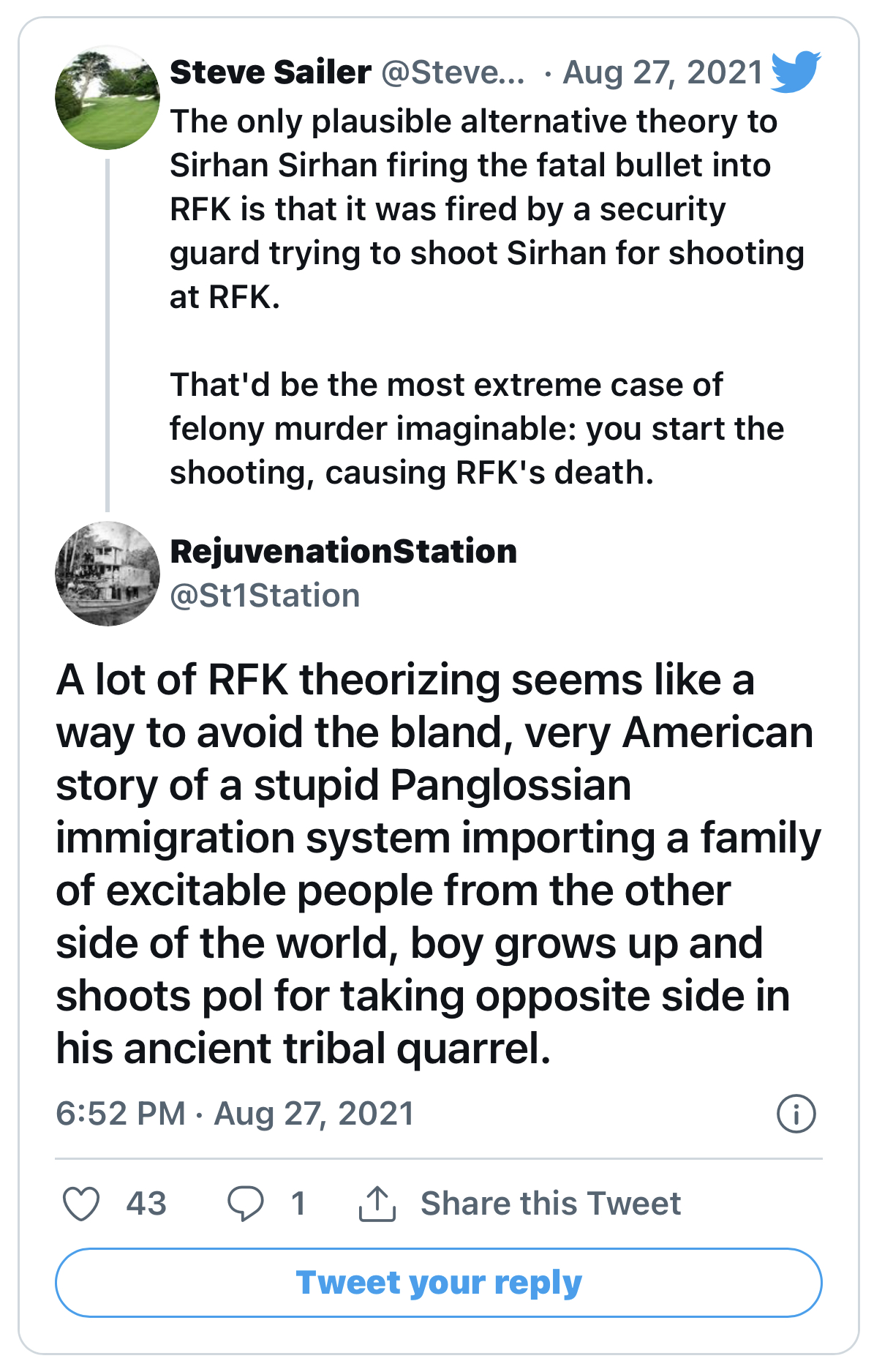