The threat of smart machines to jobs is becoming more recognized as the economy gradually improves but hiring still lags stubbornly behind. During the long recession, businesses have adopted strategies emphasizing “efficiency” which means more computers, automation and robots.

That trend is particularly noticeable in manufacturing, as shown in the graph below. 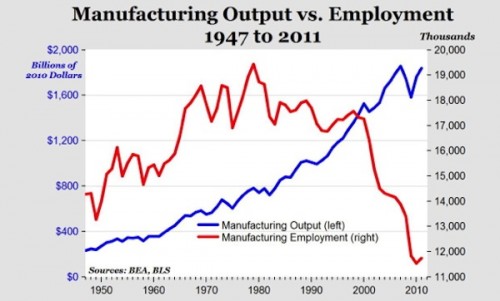 The good news is that some production is moving back to the United States from abroad, but far fewer workers are being hired than in earlier times due to smart machines performing complex tasks.

In fact, some factories are practically human free.

PBS’ Paul Solman discussed robots in a Newshour segment a couple years ago, asking the question, “Should we fear the end of work?”

But even thoughtful analysts fail to connect the immigration dots with the automated future. Does America or any first-world nation need immigrants to do the jobs when the machine revolution is hard upon us? Big-immigration advocates like Paul Ryan insist that more foreigners are needed to replace the millions of retiring boomers, but automation changes that calculus completely.

One analytical company predicts that one-third of jobs will be performed by robots just 10 years from now, and that trend goes beyond manufacturing to cognitive tasks like financial analysis and medical diagnostics. A 2013 report from Oxford University researchers estimated that “nearly half of U.S. jobs are vulnerable to computerization.”

The future of employment looks dire, but the present is already bad enough. Jobless teens are finding a grim outlook to find entry-level work. The percentage among adults of workforce participation continues to shrink.

Bill Gates has observed that the public isn’t mentally prepared for the future where “labor demand for lots of skill sets will be substantially lower.” No surprise there — no leaders in any field are discussing the coming economic and social transformation.

The coming labor market will require fewer humans, but the new Congress may consider increased legal immigration as part of an amnesty, as has been suggested by some Republicans. Nobody in Washington wants to admit the true number of worker immigrants needed: ZERO.

MarketWatch asks the question in many minds:

Will you find work once the robot revolution hits? Market Watch, January 6, 2015

U.S. auto workers have been replaced by robots and offshoring. But those same robots are displacing factory workers in emerging economies as well.

New manufacturing technologies have generated feverish excitement about what some see as a Third Industrial Revolution. In the years ahead, technological improvements in robotics and automation will boost productivity and efficiency, implying significant economic gains for companies. But, unless the proper policies to nurture job growth are put in place, it remains uncertain whether demand for labor will continue to grow as technology marches forward.

Recent technological advances have three biases: They tend to be capital-intensive (thus favoring those who already have financial resources); skill-intensive (thus favoring those who already have a high level of technical proficiency); and labor-saving (thus reducing the total number of unskilled and semi-skilled jobs in the economy). The risk is that robotics and automation will displace workers in blue-collar manufacturing jobs before the dust of the Third Industrial Revolution settles.

The rapid development of smart software over the last few decades has been perhaps the most important force shaping the coming manufacturing revolution. Software innovation, together with 3D printing technologies, will open the door to those workers who are educated enough to participate; for everyone else, however, it may feel as though the revolution is happening elsewhere. Indeed, the factory of the future may be 1,000 robots and one worker manning them. Even the shop floor can be swept better and cheaper by a Roomba robot than by any worker.

For the developed countries, this may seem like old news. After all, for the last 30 years, the manufacturing base in Asia’s emerging economies has been displacing that of the old industrial powers of Western Europe and North America. But there is no guarantee that gains in service-sector employment will continue to offset the resulting job losses in industry.

Today, for example, a patient in New York may have his MRI sent digitally to, say, Bangalore, where a highly skilled radiologist reads it for one-quarter of what a New York-based radiologist would cost. But how long will it be before a computer software can read those images faster, better, and cheaper than the radiologist in Bangalore can?

Likewise, in the next decade, Foxconn, which produces Apple AAPL, +0.01% iPhones and other consumer electronics, plans to replace much of its Chinese workforce of more than 1.2 million with robots. And soon enough, voice-recognition software will replace the call centers of Bangalore and Manila.

Job-reducing technological innovations will affect education, health care, government, and even transportation. For example, will we still need so many teachers in the decades to come if the cream of the profession can produce increasingly sophisticated online courses that millions of students can take? If not, how will all of those former teachers earn a living?

Governments, too, are shedding labor, particularly governments burdened by high deficits and debts. And, by transforming how services are provided to the public, the e-government trend can offset the employment losses with productivity gains.

Even transportation is being revolutionized by technology. In a matter of years, driverless cars — courtesy of Google GOOG, +0.16% and others — may render millions of jobs obsolete.

And of course technological innovation that is capital-intensive and labor-saving is one of the factors — together with the related winner-take-all effects — driving the rise in income and wealth inequality. Rising inequality then becomes a drag on demand and growth (as well as a source of social and political instability), because it distributes income from those who spend more (lower- and middle-income households) to those who save more (high-net-worth individuals and corporate firms).

Obviously, this is not the first time the world has faced such problems, and the past can help to serve as a model for resolving them. Late-19th- and early-20th-century leaders sought to minimize the worst features of industrialization. Child labor was abolished throughout the developed world, working hours and conditions became more humane, and a social safety net was put in place to protect vulnerable workers and stabilize the (often fragile) macroeconomy.

As we begin to seek enlightened solutions to the challenges that the Third Industrial Revolution presents, one overall theme looms large: The gains from technology must be channeled to a broader base of the population than has benefited so far. That requires a major educational component. In order to create broad-based prosperity, workers need the skills to participate in the brave new world implied by a digital economy.

Even that may not be sufficient, in which case it will become necessary to provide permanent income support to those whose jobs are displaced by software and machines. Here, too, we should attend carefully to the lessons of the past.