On Thursday, Bill Gates spoke at the American Enterprise Institute about his foundation’s efforts against poverty worldwide titled From Poverty to Prosperity (more details in his annual letter).

Mixed into his discussion of tax policy were his observations that smart machines were coming on strong and the effects on the labor market would be profound.

Following is a snip from the talk’s transcript:

FROM POVERTY TO PROSPERITY: A CONVERSATION WITH BILL GATES, American Enterprise Institute, March 13, 2014

[. . .] MR. GATES: Well, technology in general will make capital more attractive than labor over time. Software substitution, you know, whether it’s for drivers or waiters or nurses or even, you know, whatever it is you do – (laughter).

MR. BROOKS: We wonder that too sometimes. (Laughter.)

MR. GATES: It’s progressing. And that’s going to force us to rethink how these tax structures work in order to maximize employment, you know, given that, you know, capitalism in general, over time, will create more inequality and technology, over time, will reduce demand for jobs particularly at the lower end of the skill set.

And so, you know, we have to adjust, and these things are coming fast. Twenty years from now, labor demand for lots of skill sets will be substantially lower, and I don’t think people have that in their mental model.

MR. BROOKS: So aligning the incentives in our economy to move away from taxing labor, moving to something like a progressive consumption tax is just a smart thing to do to stimulate – to have an economy that’s better aligned?

MR. GATES: Well, I think economists would have said that a progressive consumption tax is a better construct, you know, at any point in history. What I’m saying is that it’s even more important as we go forward because it – the distortion – I want to distort in the favor of labor. And so not only will we not tax labor, things like the earned income tax credit, you know, when people say we should raise the minimum wage, I think, boy, you know, I know some economists disagree. But I think, boy, I worry about what that does to job creation.

The interviewer at AEI was too polite to note that a few years back, billionaire Gates was appearing before Congress pleading that the government admit a monster stream of (cheap) foreign workers.

Below, billionaire Bill Gates visits India, the home of many of Microsoft employees. 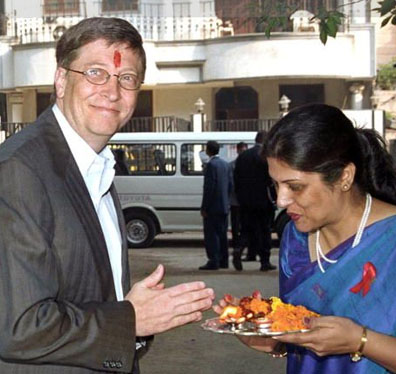 One example of Gates lobbying from 2008:

WASHINGTON–For the second year in a row, Microsoft Chairman Bill Gates ventured to Capitol Hill and urged Congress to let more foreign-born engineers work in the United States and to direct larger numbers of tax dollars to research and education.

Just as he did around the same time last year before a U.S. Senate committee, Gates on Wednesday contended America’s competitiveness in the global economy is “at risk.” He said Congress, the administration, and the next president must commit to overhauling immigration policy and encouraging both public and private research investment.

“It makes no sense to educate people in our universities, often subsidized by U.S. taxpayers, and then insist they return home,” he told the House of Representatives Science and Technology Committee during a two-hour hearing. [. . .]

The H-1b tech visa remains popular among today’s billionaire moochers looking to displace American workers who would like to remain middle class.

Now, however, we can see the future, where an estimated 45 percent of US jobs are vulnerable to robots or automation over the next two decades, as reported in Oxford University research.

The nation does not need a doubling of legal immigration going forward. In fact, ZERO immigration looks more appropriate as more is learned about the robotic future’s shrinking labor needs.