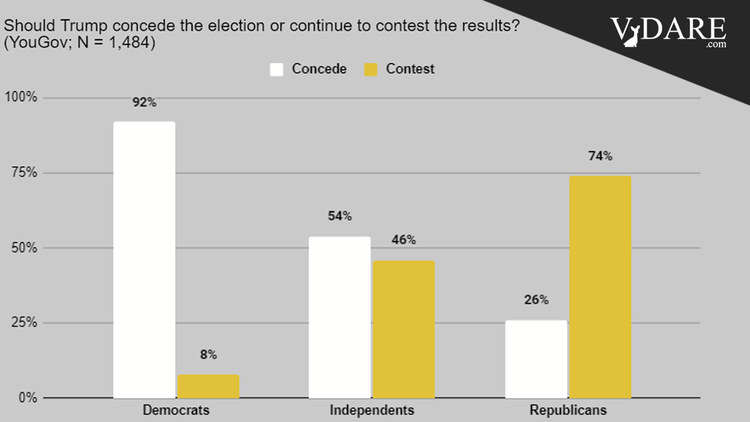 Republican Voters Do Not Want Trump to Concede

Republicans overwhelmingly want Donald Trump to continue to fight the perceived vote fraud in an election they view as crooked: From these graphs we can deduce that something like 10% of Republicans and independents doubt the election was on the up-and-up but want Trump to concede anyway. “For the good of the country”, it is common to hear these Washington Generals say.

This national split exists despite a full court press from all the approved sources of information and entertainment to treat the election results as final and Trump’s refusal to concede as dangerously dictatorial. Half the country is impervious to the mendacity–and the veracity–of the corporate media. It is incorrect to say the media has no influence. That suggests indifference. Instead, the media’s influence is negative. If the media reports it, half the country assumes the opposite to be true.

It’s really something to see the people who spent the last four years denying the integrity of the 2016 election decrying the other half of the country for refusing to accept the integrity of this one. Reaping what is sown, chickens coming home to roost, taking something and then paying for it–the aphorisms are unending. The US as it is currently constituted, however, is not unending.