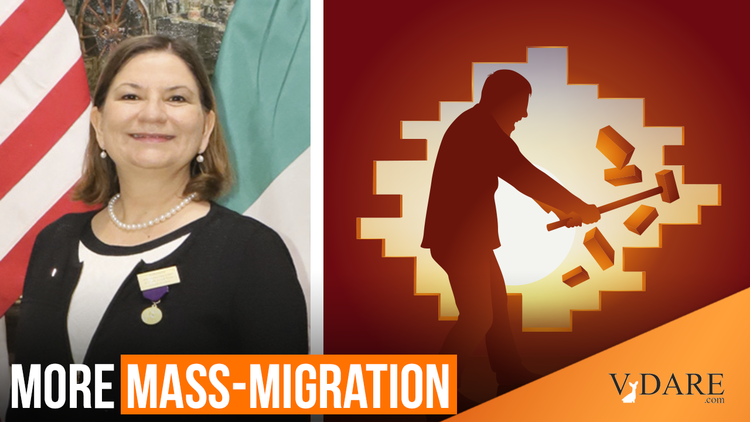 Mexican Ambassador to U.S. Calls for a Restart to Immigration

Mexico's ambassador thinks Biden will soon be in the White House, and smells blood. From Breitbart:

The U.S. immigration system “has to be based on facts and realities,” Ambassador Martha Bárcena Coqui told a forum arranged by the National Immigration Forum (NIF). She continued: ‘The facts and realities is the need to protect the most vulnerable, the need to keep open the generosity towards refugees, the need to recognize the complementarity of labor markets and demographic profiles, the need for temporary workers in the United States.” [Mexican Ambassador: Let’s Restart Mass Migration into U.S. ,  by Neil Munro, Breitbart, November 19, 2020]

So here she is in a public, pro-immigration forum, on U.S. soil, telling us what we should do.

Is she authorized by the Mexican government to say this?  Mexican President AMLO has not recognized Biden as President-Elect and says he doesn't want to meddle. [See Mexico’s AMLO Still Hasn’t Congratulated Biden. Maybe He Knows Something About Vote Fraud]

The Mexican ambassador also said that

The article quotes Mark Krikorian of the Center for Immigration Studies:

“With all due respect to Madam Ambassador, she should mind her own country’s business, not ours."

And Rosemary Jenks of NumbersUSA:

You know we have the pandemic still raging, we have economic lockdowns still going on, we have unemployment way too high. We have underemployment way too high. We have American citizens hurting. We absolutely do not need to reopen mass immigration — and certainly don’t need to give amnesty and taxpayer benefits to people who came here illegally. If Mexico thinks its plan is to just open up its own southern borders in the hopes that America will open our southern borders, that’s just going to reignite the caravans. I hope that the Biden administration is planning for that because that’s not going to go well, and 2022 is not going to go well for Democrats.

The root causes of these migrations have [not] disappeared. On the contrary, we are seeing pent up, building pressure. People cannot move now because of the restrictions on movement because of the pandemic. But the root causes are still there, [for example], the drought in Central America  … a hurricane in Nicaragua and Honduras that have totally flooded Honduras.

There is a never-ending list of "root causes" that can always be used by the open borders crowd.

Ambassador Barcena has plenty of suggestions for our country:

The United States should amnesty many illegal migrants from all over the world, she said, and also import more migrants by accepting asylum applications at U.S. embassies, so the world’s migrants will not have to travel through Mexico. “What we would like to see, of course, is that the U.S. embassies in Central America could process even more of these requests for asylum, instead of having people crossing through Mexico and asking for asylum at the border.”

What will our government be doing about immigration in the next few months?

This is yet another reason it would be better to have Trump than Biden in the White House.