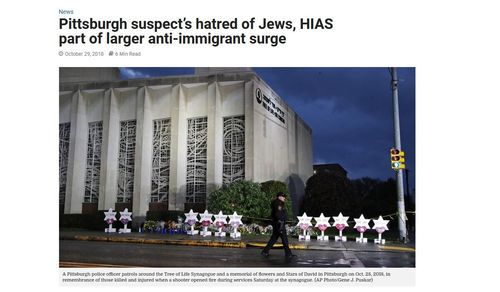 He was far from alone in his contempt for refugees and resettlement agencies.

Refugee Resettlement Watch does not, in fact, claim 6 million readers. The link that says she does goes to an NPR story. They just link to RRW's front page. It is a very popular site, though, with tens of thousands of visitors in each month. As for the SPLC attack, it's meaningless, although please note that Ann was on the same list as a British Muslim whose lawyers made the SPLC cough up $3.75 millio in libel damages.

Refugee Resettlement Watch founder Ann Corcoran forcefully condemned the shooting as a “horrific act of violence against innocent people” in a recent post. But she couched the suspect’s anger toward HIAS as part of a larger “frustration.”

“Again, there is no excuse for violence, but there is great frustration out there that a serious effort to be more open and transparent with the public might begin to quell,” Corcoran wrote.

They don't have any link to RRW there at all. The post in question is

Editor:  First, let me be clear. Nothing in this post is meant in any way to suggest that we condone this horrific act of violence against innocent people. This was a vile act by someone whose hatred of Jews was so great that he had obviously abandoned all reason and we condemn it.

Ann put in a coment replying to the ReligionNews story, writing:

Since you quote from my blog, you could at least have the journalistic integrity to link the story you are quoting. And, by the way, RRW is not a "group", it is a blog with one writer, me, Ann Corcoran. I don't rail against immigration as you suggest. I have done years of research primarily on how the US Refugee Admissions Program works and how a lack of transparency, especially by the federal resettlement contractors like HIAS work, has caused frustration in many communities. I share my research with the public. Here is the link to my post which you quote: https://refugeeresettlement...

This is the same smear we've seen with Sarah Palin and the Giffords shooting (Palin called it a "blood libel") and as far back as the shooting of President Kennedy in Dallas in 1963, when a murder committed by  a Communist gunman was blamed on the "right-wing" atmosphere in Dallas.
Compare that with the Black Lives Matters murders, also in Dallas, which are never blamed on Barack Obama or Hillary Clinton.