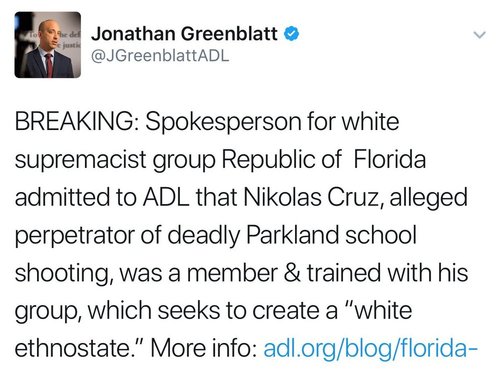 Many new outlets "reported" that Nikolas Cruz, the Hispanic-surnamed school shooter in Florida was a "white nationalist" based on a Tweet from  the ADL, which had made a phonecall to some guy they heard about on the Internet. At Takimag, Jim Goad explains how this happened, and mentions the many, many things that the MSM didn't report:

Most accounts didn’t mention the fact that in the past seven years, police had been called to Cruz’s home 39 times for his erratic behavior. They didn’t play up the fact that Cruz had been banned from the high school where he committed the massacre after fighting with and repeatedly threatening his ex’s new boyfriend. They made not a peep about the fact that Cruz had been diagnosed with depression, autism, and attention deficit hyperactivity disorder after a social-media post in which he inflicted wounds on both of his arms. They didn’t mention that a former sister-in-law suggested that Cruz was on psych meds, which is a factor far too prevalent in mass shootings. They didn’t say anything about the fact that the FBI had been warned about Cruz’s erratic behavior and his publicly stated aspirations to become a “professional school shooter” but dropped the ball and didn’t notify their Florida office about the warning. The ADL certainly didn’t offer any updates about the fact that Cruz claims his mother was Jewish, which would make him one of those White Supremacist Hispanic Jewish Nazis they keep soliciting funds to combat.

No, in this case the issue wasn’t mental illness or psych meds or broken families or FBI bungling or Jewish mothering or romantic jealousy. It wasn’t even gun control, which is a pet cause of the mainstream media unless you remind them that it was also a pet cause of the Nazis.

This is deja vu for us—after Tucson,  the MSM tried to connect Jared Taylor with Jared Loughner, a random madman who had shot Gabrielle Giffords and several other people at a constituency meeting.

Apparently someone in law enforcement suspected it because the two men—the urbane Virginia intellectual of American Renaissance, and the crazed mass shooter of Arizona's 8th Congressional District—had the same first name.

Here at VDARE.COM, we have been mildly skeptical of Palin because she shows essentially no awareness of the immigration issue. But she does have courage. With her “blood libel” posting, she threw the political class back on the defensive, and chose a phrase that was exquisitely calculated to focus attention on her text. (Our frenemy Larry Auster has posted the definitive defense of her language, citing examples of its use in Commentary magazine.)

This is true, of course, and I don't know if anyone on the Dissident Right will be able to pull out the "blood libel" card, but it might work for some gutsy spokesman at the NRA.