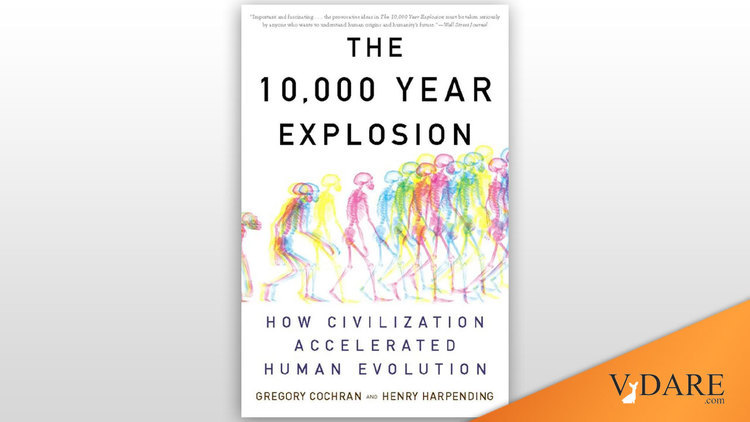 There’s been some speculation over the years that the earliest Americans were actually European. See Were American Indians part-European 10,000 Years ago? By Steve Sailer on November 21, 2013 Kennewick Man Unveiled! (Partially) By Brenda Walker on October 15, 2012, and Radical theory of first Americans places Stone Age Europeans in Delmarva 20,000 years ago, By Brian Vastag, Published: February 29, 2012.

The Washington Post has a story saying this may be wrong—the modern day Indians are descended from “Paleoamericans” like Kennewick Man, but evolution happened:

The divers found her on a ledge, her skull at rest on an arm bone. Ribs and a broken pelvis lay nearby. She was only 15 years old when she wandered into the cave on the Yucatan Peninsula, and in the darkness she must not have seen the enormous pit looming in front of her.

More than 12,000 years later, in 2007, after the seas had risen and the cave system had filled with water, her skull — upside down, teeth remarkably intact — caught the eye of a man in scuba gear.

He and his two fellow divers gave the girl a name: Naia. Her remains may help determine the origins of the earliest Americans and finally solve the mystery of why they looked so dramatically different from the Native Americans of recent millennia.

A paper published Thursday online in the journal Science argues that the discrepancy in appearance between the Paleoamericans and later Native Americans is most likely the result of recent, and relatively rapid, human evolution — and not the result of subsequent migrations of people into the Americas.

Tests on mitochondrial DNA taken from Naia show that she had a genetic marker common today across the Americas, one that scientists say evolved in a prehistoric population that had been isolated for thousands of years in Beringia, the land mass between Alaska and Siberia that formed a bridge between the continents during the Ice Ages.

Thus, according to the report, the Native Americans and the Paleoamericans are the same people, descended from the same Beringia population. They just look different because of recent evolution.”[ Girl’s 12,000-year-old skeleton may solve a mystery, By Joel Achenbach, Washington Post, May 15, 2014]

Oh, recent evolution! You see, except when it’s reassuring Native Americans of their aboriginal title to the continent (Kennewick Man looked kind of like Patrick Stewart) recent evolution is the whole controversial thing about human biodiversity, the thing the late Stephen Jay Gould refused to believe in. Gould wrote

Say it five times before breakfast tomorrow; more important, understand it as the center of a network of implication: “Human equality is a contingent fact of history.”

“Recent evolution” is the controversial fact behind Cochran and Harpending’s The 10,000 Year Explosion, and also Nicholas Wade’s last two books, A Troublesome Inheritance and Before The Dawn.

Recent evolution is what, if it hadn’t happened, would give all races the same average IQ, which was Stephen Jay Gould’s point. And that's why there's a "Hate Squad" attacking Nicholas Wade.