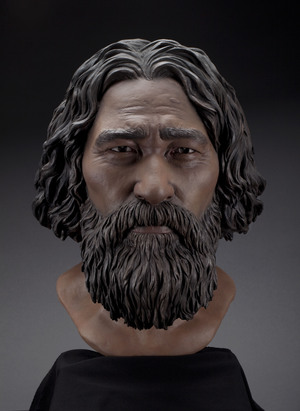 It was interesting to hear NPR’s radio report last night about Kennewick Man, who has been long disappeared from media reports and public discussions. The main thrust of the audio segment was of his athletic musculature, describing him as “all beefcake” and leaving out his racial identity entirely (read the transcript or listen to the audio).

(At that point, I hazarded a guess that the K-man was not a native American. Interestingly NPR’s online version of the story included the racial component and the photo shown here.)

You may recall that the accidental discovery of the remains in 1996 set off a series of cultural skirmishes, where native groups angrily insisted that Kennewick was one of their tribe and therefore should be buried ASAP. Scientists wanted to examine the remains to learn more about the identity of the man, and they finally prevailed in 2004, although the investigations have been severely limited because of cultural sensitivities.

Often the facts of pre-history are more complex and interesting than the standard story, and so it is in this case. The remains were of a man of Asian descent, possibly Polynesian, who are known to have been awesome sailors who traveled much of the Pacific. (For an overview of pre-Columbian explorations indicating how much early man got around, see the History Channel’s “Who Really Discovered America?”)

The information released so far is pretty sketchy, but is nevertheless fascinating. Hopefully more is coming.

ELLENSBURG, Wash. (AP) — Not only was the ancient human known as Kennewick Man not Native American, he was not even from the Columbia River valley where his bones were found, according to the scientist who led the court battle to study his remains.

The more than 9,300-year-old skeleton is at the center of a yearslong rift between scientists who want to examine it and tribes who claim it and are seeking to have it reburied.

On Tuesday, Columbia Plateau tribal representatives invited Doug Owsley, a physical anthropologist at the Smithsonian Institution’s National Museum of Natural History, to meet with them and discuss his findings.

Owsley said isotopes in the bones indicate Kennewick Man was a hunter of marine mammals, such as seals.

“They are not what you would expect for someone from the Columbia Valley,” he said at the gathering hosted by Central Washington University. “This is a man from the coast, not a man from here.”

While Owsley has noted before that Kennewick Man was not of Native American descent, this was the first time he’s said the man was not even from this area, The Seattle Times reported.

Owsley said the skull is most similar to an Asian coastal people whose characteristics are shared with people, later, of Polynesian descent.

“There is not any clear genetic relationship to Native American peoples. I do not look at him as Native American,” he said, adding there is still much more to learn from the bones. “I can’t see any kind of continuity. He is a representative of a very different people.”

Kennewick Man was found in 1996 and represents one of the oldest and most complete sets of bones in North America. The 300 bones are held at the Burke Museum in Seattle.

After nine years of legal battles, a federal appeals court ruled in 2004 that the bones were not protected by the Native American Graves Protection and Repatriation Act because they were so old that it was impossible to link them to modern-day tribes.

The tribal members who listened to Owsley stuck to their conviction that Kennewick Man is a part of their people’s past and needs to be reburied. They’re hoping Congress will change the law.

“Today just adds to getting the Kennewick Man back,” Armand Minthorn of the Umatilla Board of Trustees told Owsley. “That is our goal, and that is going to be our effort. It would be great if you could help. If you don’t, that is OK, too.”

Ruth Jim, head of the Yakama Tribal Council’s cultural committee, said it is frustrating that Kennewick Man is still out of the ground.

“I don’t disagree that the scientists want to do their job, but there should be a time limit,” she said. “The only concern we have as tribal leaders is he needs to return to Mother Earth.”

Jaqueline Cook, repatriation specialist for the Confederated Tribes of the Colville Reservation, said scientists’ finding that the skeleton had been purposefully buried was significant.

“It says a lot that somebody took care of him,” Cook said. “To me, that says community. And that he is part of the land. And our land.”