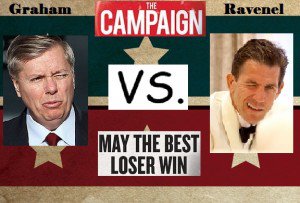 The announcement was not particularly good news for Immigration Patriots though: no mention was made of Graham’s fanatical Amnesty/Immigration Surge enthusiasm.

Ravenel said crafting a new foreign policy would be a centerpiece of his campaign.

“Ill-conceived interventions and this constant flip-flopping of allegiances between terrorist organizations does not make us safer – it only makes another attack on our homeland more likely,” Ravenel said.

None of the press accounts suggest Ravenel said anything about immigration at various appearances yesterday (or was asked about it). But he had the poor taste to give an interview to The Daily Beast of all places: T-Rav: The Reality TV Star Running for Senate in South Carolina by Patricia Murphy 07.04.14. This does not make good reading:

In a stem-winding two-hour interview, he spoke openly about everything from Lindsey Graham's moral deficits to the difficulty polo players' have finding legal workers to groom their horses…

(I repeat: Are Horse Types The Most Selfish People In America?) Ravenel went on

“These immigrants reinvigorate the American spirit,” Ravenel says of those in the country today...It’s that spirit that sometimes we Americans take for granted.”

Ravenel endorses a "robust worker visa program," but stops short of endorsing a path to citizenship for those in the United States already. "I am open to any ideas that sound reasonable. What's happening now is totally unreasonable and it’s bad for the economy. Saying let's control the border first and then we’ll deal with immigration is like saying we can't deal with your cancer until your symptoms go away.”

This drivel sounds even worse that the policy of Victor Kocher, the South Carolina Libertarian Party candidate for Senate.

That a man with Ravenel’s awkward personal history should be willing to endure the vicious obloquy his candidacy will attract – and the financial cost – but spurn the powerful Anti-Amnesty faction in the state which is the main reason Graham only got 56% in the Primary is just astonishing. Particularly when the damage by mass immigration to South Carolina workers has long been well documented and when the Obamacrat Border dissolution policy makes illegal immigration white hot.

But that is modern Libertarianism for you. Back when Ron Paul ran in 2008 he could tell Peter Brimelow “I Believe In National Sovereignty” (and call the repeal of Birthright Citizenship!). But by the next election as Washington Watcher sadly documented for us in “Worse than A Crime—A Blunder”: Ron Paul's Tragic Turnaround On Immigration a takeover by looney left libertarianism was complete and the more sensible Paleolibertariansm banished. Ravenel appears to have been swept along.

The silliest aspect of this is by attacking Graham on foreign policy Ravenel is challenging the South Carolina GOP’s owners on an issue as dear to them as open borders. All the lavish funding of dirty tricks will be forthcoming while the quite real possibility of pulling off another Cantor using anti-immigration sentiment amongst actual voters will be thrown away.

“He has no moral principles, there’s no introspection… It’s always about scare-mongering or playing to the people who are paying his bills…

Quite right. What a wasted opportunity!