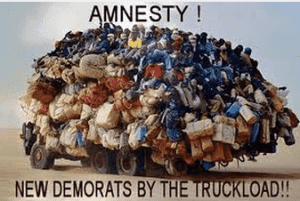 This morning I noticed that none of my MSM news summary emails had any coverage of the Obamacrat Border enforcement termination scandal which as Brenda Walker has noted is rapidly creating serious public health crises all over America. A consequence of this is that nothing readily appears on the traffic-driven Google News aggregator.

This is a matter of editorial choice. Turning to the Drudge Report I found that as of 10-08 AM EST no less than 26 items on the subject of immigration  were posted – a third of the total number of posts.

Drudge of course survives because it selects stories on the basis of what would interest its readers rather than what it thinks they ought or ought not to know about – or what is helpful to the Democrats.

An examination of the Drudge sources clinches the suspicion of MSM repression. Only one was truly a MSM source: Protesters of undocumented immigrants vow to block new arrivals By Joseph Serna, Kate Linthicum, Matt Hansen The Los Angeles Times July 3 2014. This is about the heroic patriots of Murrieta CA. Two were Associated Press stories. AP is a wire service and distribution depends on the choice of its subscribers. Unsurprisingly, Drudge had to source the more damaging story Obama under pressure to visit US-Mexico border By Julie Pace and Erica Werner from the AP website itself.

Apart from that, the stories were all drawn from local TV stations and conservatively oriented-webzines like Breitbart (6) and websites like Rush Limbaugh’s.

"Our military bases are turning into refugee camps. I never thought I'd see this in the United States of America," House Homeland Security Committee Chairman Michael McCaul, R-Texas, said.

McCaul spoke at a field hearing he convened in McAllen, Texas, in the Rio Grande Valley which has seen the brunt of the migrant surge.

My emphasis. Apparently no other MSM outlet thought a field hearing on this mess by the House Homeland Security Committee Chairman worth reporting.

The only other Washington Republican featured was Lou Barletta, who made sensible remarks in a piece showcasing a prominent Democrat crazy: Sheila Jackson Lee Brings Lollipops to Illegals, Says Border Crisis Not National Security Threat by Tony Lee Breitbart.com 3 Jul 2014

Drudge did a valuable public service by alerting is readers to NumberUSA’s feature MAP: Where feds are trying to relocate illegal border surgers which includes the feature eSign the petition asking your three Members of Congress to fight the relocation!

So in other words my early morning perception is correct: the MSM is in full repression mode, as usual when the issues are critical.