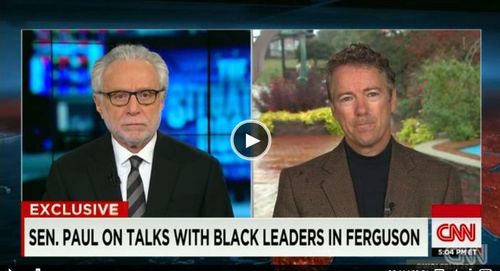 There he goes again.

Rand Paul is meeting with NAACP leaders in Ferguson, Missouri with another master plan for the Republicans to win the black vote.

The Kentucky Republican, who said his meeting went "very well," said he laid out his views on demilitarizing police, reforming the criminal justice system and boosting urban economies.

"I don't want to characterize how everybody else feels about what I said, but I think it was a good opening to the conversation," Paul said in an interview set to air Friday. "I think in the Republican Party, the biggest mistake we've made in the last several decades is we haven't gone into the African American community, into the NAACP and say you know what, we are concerned about what's going on in your cities and we have plans. They may be different than the Democrats, but we do have plans and we do want to help."

According to his office, participants in the meeting included members of the NAACP, the Urban League and several local business and church leaders.

Paul was one of the most outspoken Republicans about the police response to protests that followed the August shooting death of Michael Brown, an unarmed teenager who was killed by a police officer in Ferguson.

And what is this master plan?  What is the thing that will transform black neighborhoods into the equivalent of Hong Kong?

Paul said in the meeting he proposed his "economic freedom zones" plan, which would aim to give tax incentives and financial breaks to depressed areas and neighborhoods in large cities, with the ultimate goal of stimulating the economy and drawing in more business.

"By dramatically lowering taxes in a city like Ferguson, you would have more job opportunities, less tension, and less of sort of this problem that develops from crime," he said.

Of course, this is simply a throwback to Jack Kemp, who built a following around the idea that he could be the Republican who would win black votes with a "pro-growth" message.  The mainstream media, which of course can be trusted to safeguard the interests of conservative Republicans, continues to promote the idea that Kemp's strategy will somehow help the Republican Party.  Needless to say, Kemp also distinguished himself in attacking Pat Buchanan, defending racial preferences against any attempt to abolish them, and displaying a staggeringly willful ignorance on immigration issues.

There's no evidence to suggest that "enterprise zones," "freedom zones," President Obama's "promise zones," or anything similar to any of these concepts has anything like a positive economic impact.  [Enterprise Zones: A Bipartisan Failure, by Bruce Bartlett, The Fiscal Times, January 10, 2014]

But that's not the point.  The point is that Paul is simply moralpreening in preparation for his Presidential run by showing how far he has moved from his unacceptable roots.  According to the article, when he questioned on his past critique of the Civil Rights Act, Paul responded that at the time of his comments he was "just a physician in a small town."

"Do you learn more about issues over time? Sure, but I was never against the Civil Rights Act," he said.

Except of course when he was against the Civil Rights Act.  Unless he really doesn't know what it means, which is quite possible.

Since becoming a Senator, Rand Paul has flip-flopped on so many issues that he makes John Kerry look consistent.  But the one thing you can count on is Paul striving to make his opinions fit with Beltway convention.  The same goes for his subordinates.

And like amnesty itself, it seems the PC foolishness of Jack Kemp is a zombie, resurrecting no matter how many times it is buried by facts.  If only the media would stop treating it like some bold new idea instead of something that was stale 30 years ago.