Park Inflation—Obama Inflates The San Gabriels To National Monument Status … In The Name Of Diversity!

When I was a kid, there was a clear hierarchy of National Parks (e.g., Yosemite, Yellowstone, Grand Canyon), National Monuments (second tier attractions like Death Valley and Joshua Tree), and National Forests (e.g., the Angeles National Forest in the San Gabriel Mountains north of Los Angeles). But there has been a steady pattern of park inflation over the decades with numerous National Monuments getting bumped up to National Parks. And now, President Obama is using his visit to Gwyneth Paltrow’s house to inflate the ho-hum San Gabriels to National Monument status … in the name of Diversity! The Washington Post explains:

Obama to designate San Gabriel Mountains as a national monument

When President Obama stands in the shadow of the San Gabriel Mountains northeast of Los Angeles on Friday and sets aside 346,000 acres as the country’s newest national monument, he will bring together two of the top priorities of what he hopes will be his presidential legacy — environmental protection and cultural and demographic diversity.

The ceremony — which will mark the 13th time Obama has used his legal authority to designate a monument — reflects a broader White House strategy to preserve public lands that resonate with key demographic groups.

Latino organizations and allied groups have lobbied for nearly a decade and a half to safeguard the San Gabriel Mountains on the grounds that they provide critical green space and fresh water to the area’s large Latino population.

“What we want to ensure, and what the president has focused on, is that all Americans, and the great diversity of Americans, both have the opportunity to access these important places and can experience them” in perpetuity, White House counselor John D. Podesta said in an interview…

Podesta said he doubted whether Friday’s designation would influence next month’s midterm elections. “Most of the decisions about Congress and governors are not going to be made in Los Angeles County. But I think this will get an enthusiastic response from the Latino community in Los Angeles County, as it should.” …

But the Wilderness Society’s Daniel Rossman, who chairs the San Gabriel Mountains Forever coalition, said making the area into a monument will both raise the area’s profile and prompt federal officials to draft a management plan “to protect some of the last remaining wild places” and reduce “the trash, graffiti and safety hazards” that exist now.

Rossman noted that the east fork of the San Gabriel River, which lies in the heart of the Angeles Forest, often violates Los Angeles regional water-quality standards because of the amount of diapers, plastic bags and other waste flowing through it. 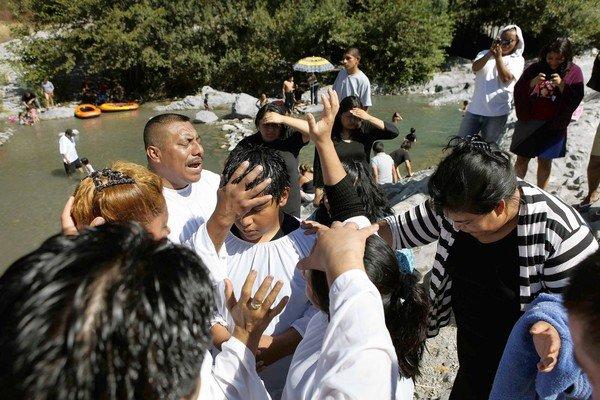 You know, it’s not really the Evil White Man who is throwing his muchachos’ disposable diapers in the East Fork of the San Gabriel River, as this 2012 Los Angeles Times article “An Alpine Creek that Reeks” (and accompanying reader comments) makes clear.

According to a recent analysis by the liberal Center for American Progress on the country’s 461 national parks and monuments, 26 center on the black community, 19 on Latinos, eight on women, two on Asian Americans and zero on the LGBT community.

I was driving to play golf at Griffith Park one Saturday morning in 1996 and had some extra time so I took Griffith Park Drive over the mountain rather than the freeway. Parked bumper to bumper for a mile were guys sitting in cars. Maybe while he’s out here, Obama will declare that stretch of road the first LGBT national park?