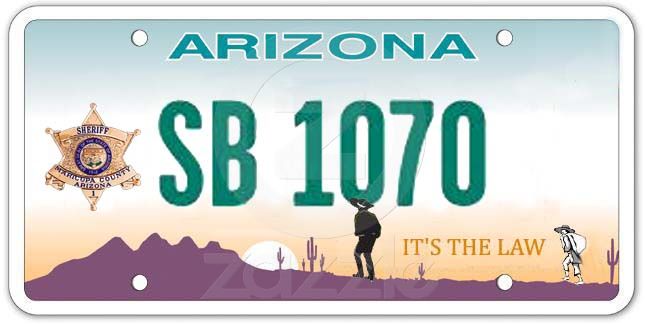 Yet another poll shows that the American people still approve of Arizona’s state approach to immigration enforcement, in which law and sovereignty are taken seriously. Not only that, they wish their state was more like Arizona in cracking down on immigration anarchy.

This follows two years of the most vicious verbal attacks against the law and its supporters.

Perhaps the average citizen knows that legal immigrants are required to carry their green cards at all times by law, yet liberal scribblers continue to fret over the possibility that illegals might face a similar requirement.

(e) Every alien, eighteen years of age and over, shall at all times carry with him and have in his personal possession any certificate of alien registration or alien registration receipt card issued to him pursuant to subsection (d). Any alien who fails to comply with the provisions of this subsection shall be guilty of a misdemeanor and shall upon conviction for each offense be fined not to exceed $100 or be imprisoned not more than thirty days, or both.

Regarding the issue of what to do with the millions of existing illegal infiltrators, which concerns the anti-sovereignty cadres so thoroughly, nearly half of those polled (49%) thought the foreigners should be sent along home.

After the Supreme Court upheld Arizona’s law allowing police to check immigration status of those they stop in the course of their duties, an overwhelming majority of Americans say they want to see their own states enact the same kinds of laws.

The latest The Washington Times/JZ Analytics survey, released Monday night, found about two-thirds of all likely voters would like to see their own police be able to check status during routine traffic stops. Support was high across most demographics, including self-identified Republicans and independents, and even Hispanics favored the policy by a 55 percent to 41 percent margin.

After a challenge by the Obama administration, the Supreme Court last month struck down most of Arizona’s 2010 law that tried to create state penalties for illegal immigration, but the high court said states and localities do have the authority to empower their police to check the immigration status of those they detain during their routine duties.

All of the justices agreed the checks were legal in theory, though they said that could change if police use them in a way that violates other rights, such as detaining someone for too long.

In the poll, voters were told arguments for and against the law, then asked if they wanted to see their own communities enact something similar. Overall, 50 percent of voters said they “strongly” agreed with enacting that law, and another 17 percent “somewhat” agreed. Just 29 percent strongly or somewhat disagreed, and the rest were uncertain.

John Zogby, who conducted the poll for The Times, said voters appear not to be worried about getting detained themselves.

President Obama and Attorney General Eric H. Holder Jr. both said they thought this kind of statute, which critics call the “show your papers” law, would lead to racial profiling — though Arizona police have been instructed that race alone is not sufficient reason to suspect someone may be illegally in the country.

But before the courts, the Obama administration only argued over federal versus state powers and avoided suing over racial profiling.

Since the ruling, officials have signaled that’s still an option, with Mr. Holder telling the National Council of La Raza’s annual conference this week he’ll keep a close eye on the way Arizona and other states move forward.

The Times/JZ Analytics Poll surveyed 800 likely voters by live phone interview between July 6 and 8. The results are weighted for demographics, and the poll has a margin of error of plus or minus 3.5 percentage points.

The survey also asked how voters think the estimated 11 million illegal immigrants now in the U.S. should be handled, and it found a strong plurality want them to go home without having a special path to citizenship from within the U.S.

Overall, 49 percent said illegal immigrants should be “given a chance to get their affairs in order then sent home, where they can apply to return through regular immigration channels.” That’s up 4 percentage points from the last TWT/JZ Analytics Poll in May.

Support for a pathway to citizenship from within the U.S. dropped 4 points, down to 29 percent, while a third option — letting illegal immigrants stay in the U.S. but without the chance for citizenship — was static at about 9 percent.

Both Republicans and self-identified independents strongly favored having illegal immigrants go home, while Democrats were more likely to support a path to citizenship.

Mr. Obama has called for a path to citizenship and last month issued a directive canceling deportations for most illegal immigrants age 30 and under.

Meanwhile, presumptive Republican presidential nominee Mitt Romney has staked out the strictest immigration enforcement platform of any major-party candidate in recent years, praising state laws such as Arizona’s as a “model’ and calling for enforcement at the federal level.

He has said, however, that he would allow illegal immigrants who join the U.S. military to have a path to citizenship.