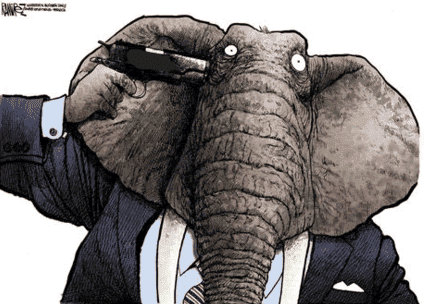 Did the GOP leadership of the House and Senate think that party voters wouldn’t detect their consistent failure to oppose Obama policies of crazed overspending, globalized trade and immigration amnesty, among others?

A recent Pew survey shows the support of Republicans for GOP behavior has dropped like a stone — down 18 percent (from 86% to 68%) since the Repubs took over the Senate. Last year the party promised opposition to Obama, and citizens have gotten nothing of the kind. 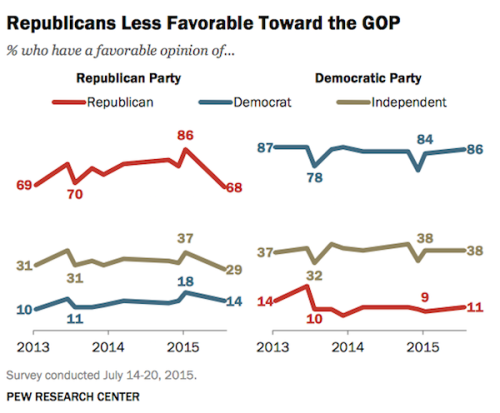 I’ve excerpted the section regarding Republican voter disappointment below. You can read a PDF of the complete report here.

The current survey finds that positive views of the GOP among Republicans have declined 18 percentage points since January, from 86% to 68%. Independents also view the Republican Party less favorably; 29% today, compared with 37% six months ago.

Democrats, by contrast, continue to express highly positive opinions of their party: 86% view the party favorably, little changed from 84% in January. Independents’ views of the Democratic Party also are unchanged since January, at 38%.

And as a timely proof of the perfidy of Republican leadership, on Friday Senator Ted Cruz called out leader Mitch McConnell on the Senate floor for lying to the conference about the important-to-elites Export Import Bank bill. That’s not something that happens in the gentlemanly Senate, where politeness is sometimes used to cover up malfeasance and bald-faced lies. Americans care about jobs, the economy and safety, given the increasing success of our many enemies. But instead of taking on the issues citizens care about, the Senate is prioritizing a banking scam for wealthy corporations.

In the speech, Cruz says—calling him out personally—McConnell lied to the entire Republican conference. Cruz’s speech stemmed from how McConnell—despite telling the entire GOP conference there was no such secret deal with the Democrats during the Obamatrade process to later bring up Ex-Im reauthorization—actually did cut a deal with Democrats, specifically Sen. Patty Murray (D-WA)

“Today is a sad day for this institution,” Cruz said on the floor.

The Senate operates based on trust. Whether we are Democrats or Republicans, these 100 Senators have to be able to trust that when a Senator sys something, he or she will do it. Even if we disagree on substance, that we don’t lie to each other. What we just witnessed this morning is profoundly disappointing.

Cruz then proceeded to expose comments McConnell made to Republican senators in a private lunch, showing that McConnell lied to his entire conference. The comments Cruz talks about were around the time of the first Obamatrade votes in the Senate, when McConnell told Republicans—something that has since been proven to be untrue—that there was no deal with Democrats to vote on Ex-Im later in exchange for the necessary votes to pass Obamatrade. [. . .]

Following are the remarks of Senator Cruz, which are devastating in their calm recitation of facts. At one point he noted why the voters have good reason to be disgusted with the Republicans they elected:

Weve had a Republican majority in both houses the Congress now for about six months. What has that majority done? First thing we did in December is we came back and passed a trillion-dollar cromnibus plan, filled with pork in corporate welfare. That was the very first thing we did, Then this Republican majority voted to fund Obamacare, voted to fund the President Obamas unconstitutional executive amnesty and then leadership programs through the confirmation and then leadership rammed through the confirmation of Loretta Lynch as Attorney General.

Madame President, which of those decisions would be one iota different if Harry Reid were still majority leader? Not a one, not a one. This Senate operates exactly the same, the same priorities. And I tell you why. Its not that this majority doesnt get things done; it does get things done, but it listens to one and only one voice. That is the voice of the Washington cartel and the lobbyists on K Street, and the big money and big corporations. . .

Radio host and conservative author Mark Levin called the Export Import Bank “a multi-billion-dollar money-laundering operation in my view that takes the money out of the common taxpayers pocket and subsidizes Boeing to forty percent of its budget. . .” He commended Ted Cruz highly for speaking out for government that works for the people, not for the campaign-check writers.