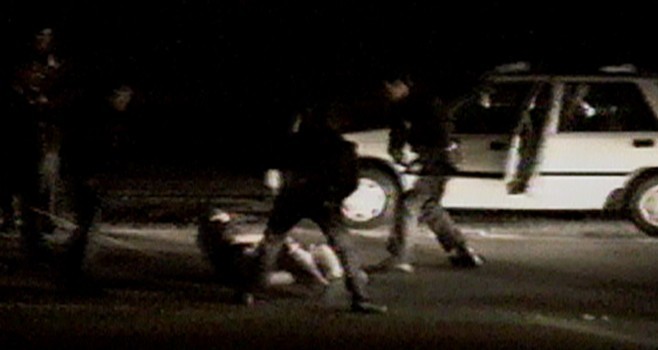 On Saturday evening, just as the family and I were finishing dinner, CNN's 1-hour "Special Report" on the March 3 twentieth anniversary of the Rodney King incident, Race and Rage, began to re-air at full volume on our television screen.

The opening scenes included brief, dark footage of the baton-swinging LAPD officers, close-up visuals of King's swollen and bloody face, and the violent aftermath of the acquittal of four officers, which touched off deadly riots.

The stunned reaction of our daughters (ages 12 and 16), and their jaw-dropped facial expressions to the now famous—and edited—video footage of LAPD officers striking King with blow after blow with their batons, brought home a stark reality. The younger generation of gullible TV viewers—kids who were too young to remember the actual incident—uncritically soak up this highly sensational footage, packaged and presented as an unbiased special broadcast by a major news organization.

But there's no context. It is as if details are irrelevant—all that matters is the visual image of white cops beating a black motorist.

Much of Race and Rage consists of a celebrity-style interview of King by CNN anchor Don Lemon, a young, black male host of CNN's weekend news segment. At key moments in the show, King is sitting across from Lemon, a casually dressed, sympathetic interviewer, the male counterpart of CNN's Soledad O'Brien.

Lemon asks King to recall what took place on the early morning hours of March 3, 1991, when King was pulled over after an 8-mile freeway chase at speeds in excess of 117mph. King and Lemon drive to the spot where King was pulled over by LAPD officers. King gets face down on the pavement, discussing the conversation that took place, claiming an officer used the "N" word while striking him with a baton, as if he was innocently picked on because he was a vulnerable black motorist.

Critical details of what took place are glossed over or omitted:

Instead, this CNN production presents King as a victim of police brutality, and reinforces the image of the LAPD under Chief Daryl Gates as racially oppressive.

Hardly any mention is made of King's violent, criminal past. Lemon indirectly touches on King's problems, but omits the details of his lengthy record.

[Video Of King Explaining Why He Was Driving Without A License, CNN.com. King states that he hasn't been able to get a license in California since an incident where he was charged with drunk driving in Newcastle, PA in 1995. He was acquitted, but required to surrender his license, probably because he refused to take a blood-alcohol test.]

But none of the details of King's lengthy record of reckless and dangerous behavior seemed worth mentioning from the vantage point of CNN's producers. As Variety's Brian Lowry has noted: "Just because you have a camera in the right place doesn't mean you're telling the whole story". [CNN Doesn't Connect With Rodney King Special, Variety, By Brian Lowry, March 3, 2011]

Lou Cannon, author of Official Negligence : How Rodney King and the Riots Changed Los Angeles and the LAPD [See video of him discussing his book]and LA bureau chief of the Washington Post (1990-1993), places considerable blame on the media, especially broadcast news, for what he describes as the "mythology of the Rodney King incident". He points out that what most Americans saw on that video footage is a "partial record of a partial record":

"The mythology of the Rodney King incident derives almost entirely from the edited version of the Holliday videotape.

"That version begins more than halfway through an incident in which Stacey Koon [lead LAPD officer] tried to take King into custody without hurting him. This fact in itself sets the incident apart from numerous proven cases of police brutality in which victims were hit, choked, or shot without provocation. It also sets the incident apart from classic police pursuits in which excited or angry officers, adrenaline pumping, reflexively beat a suspect once they catch him.

"Several minutes elapsed between the end of the King pursuit and the first baton blows, an interim in which officers tried to take King into custody—first with verbal commands, then by gang-tackling him and trying to handcuff him, then with Koon's two bursts from his powerful electric stun gun. King was not struck with a baton until he climbed to his feet after being hit by the second burst from the Taser, then charged toward [LAPD officer] Laurence Powell.

"That these facts are not known or remembered by the public even after three trials is primarily the fault of television. KTLA won the prestigious Peabody Award for showing the Holliday videotape, but when editors at that Los Angeles station deleted the frames of King's charge in their effort to remove subsequent blurry footage, they removed the explanation for Powell's first and most damaging baton blow.

"Newspapers are not blameless in their coverage. Most reporters, including me, relied initially on the edited footage and were not aware of the deleted footage until much later…. Had television not stacked the deck against the officers with its shameless editing of the videotape (done, it seems, in the interests of improving picture quality, rather than out of editorial bias), the Simi Valley trial might have ended differently.

"What the editing did for the defense in that trial was establish that the media had not told the whole truth."

On March 5, CNN chose to perpetuate the King mythology.

In many respects, the real victims in the Rodney King incident were LAPD officers Stacey Koon, Laurence Powell, Theodore Briseno, and Timothy Wind They were shamelessly subjected to "double jeopardy" by the unspeakable Bush I Administration by being placed on trial a second time, after the acquittals in the first trial, for violating King's federal "civil rights".

Koon and Powell were convicted in the second trial, sentenced to 30 months, and served nearly two years. Both lost their careers. Briseno and Wind, though found not guilty, were fired by the LAPD anyway. [Key Figures in the LAPD Officers' (Rodney King Beating) Trial, UMKC Famous Trials Page]

These officers put their lives on the line for the public. They tried to carry out their responsibilities to arrest a belligerent suspect with a criminal record, who, as a menace to public safety, has placed motorists at risk on multiple occasions. Fragmentary news reports suggest they have had extreme difficulty rebuilding their lives.

In contrast, King received $3.8 million as a result of a civil action.

Some 53 people died, thousands were injured and property damage exceeded $1 billion in the riots that followed the officers' original acquittal. No doubt CNN will be memorializing them on the twentieth anniversary, next April.

MSM Journalists and news executives have recently been moaning the demise of print media and the declining interest in network news broadcasts. The major news weeklies continue to lose readers as interest in alternative news sites soars.

For the sake of the younger generations—teens who are naïve and impressionable —those plummeting MSM audiences are a thoroughly good thing.