Obama's Immigration Coup: If GOP Afraid To Defend Americans, How About Defending The Constitution? 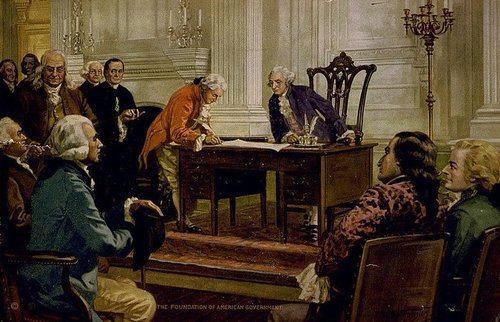 As the hours go by, it has become painfully apparent that neither Romney nor any other prominent Republican “leader” is willing to denounce Friday’s Amnesty Coup D’état by President Obama. (Nicely put, Bigtimer).

Obama can play the Race card continuously and the GOP Establishment seems to lack the stomach to call him on it. And apparently the Cheap Labor Lobby or an even more sinister force has a veto on Republican immigration policy.

But there is a much broader issue raised by Obama’s Friday putsch, which is well discussed in an extraordinary essay posted on Politico on Saturday morning: Obama’s policy strategy: Ignore laws 6/16/12 by Steve Friess:

Rather than pushing new laws through a divided Congress to enact his agenda, Obama is relying on federal agencies to ignore, or at least not defend, laws that some of his important supporters — like Hispanic voters and the gay community — don’t like.

As of Friday, the federal government won’t deport undocumented immigrants under age 30 who came to the United States as children. It is a temporary, de facto implementation of a part of the stalled DREAM Act…

On gay rights, too, the administration has asked agencies to do less. In February 2011, the Justice Department announced it would not defend DOMA against court challenges — an unusual step for the agency, which typically defends legal challenges to laws on the books…In August, Obama’s DHS announced it would no longer deport the noncitizen spouses of gay Americans — a direct contradiction to DOMA as well.

The tactic has its start in the earliest days of the administration. In October 2009, the Department of Justice announced it would not prosecute medical marijuana users or suppliers in states where it’s legal, despite the state laws contradicting federal law. Federal law generally trumps state law in such matters.

This is out-and-out lawlessness. You had a clip of the president himself say months ago 'I cannot do this on my own because there are laws on the books.' Well, I have news for the president: The laws remain on the books, they haven't changed,"

…"He proposed the DREAM Act of which the executive order is a variation. He proposed a DREAM Act. The Congress said no. The Congress is the one who makes the laws…This is not discretion…This is the declaration of a whole new set of criteria, which is essentially resurrecting the legislation that the Congress has said no to."

VDARE.com has not always had an especially high opinion of Krauthammer, but he does sometimes get things right: in this case he has excelled himself

Since we scorn them so often, it is only fair to note National Review has an excellent editorial on the topic (probably written by non-staffer Mark Krikorian) - Illegal Amnesty June 16 2012

The president’s executive order violates the constitutional separation of powers that defines the political architecture of our republic. If Congress allows this illegitimate executive order to stand, it will have in effect delegated its power to make law to the president.

Congress already has spoken on this amnesty proposal, and the answer was “No.” Even the president has to take no for an answer when the law requires him to. Barack Obama once knew that. He probably still does.

“If the president says we’re not going to enforce the law, there’s really nothing anyone can do about it,” University of Pennsylvania constitutional law professor Kermit Roosevelt said.

This is quite wrong of course: a President systematically breaking the laws he has sworn to

can and should be impeached.

No doubt that is far beyond the courage of the Republican Congresscritters. But the immediate point is that they could quite validly couch forceful opposition to Obama’s coup purely in terms of the Constitution – about which many Americans care very deeply.

This would save them from enduring the agonies of Hitler’s Revenge.