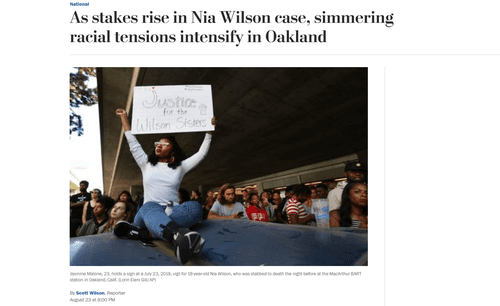 This week we’ve been told that one minor murder in Iowa doesn’t amount to a hill of beans in the big picture of things and that the only reason Fox News is covering the murder of a beautiful young white woman is because of racism and sexism.

But the murder of a beautiful young black woman in Oakland sure has been getting a lot of national attention as well. From the Washington Post:

OAKLAND, Calif. — … Nia Wilson was 18 years old on the Sunday evening in late July when, returning home, she was stabbed in the neck on the platform of a Bay Area Rapid Transit train. Her 26-year-old sister, Lahtifa, was badly wounded in the attack.

The suspect, John Lee Cowell, is a felon who has been in and out of California’s prisons for much of his life. He is 27 and, his family says, a diagnosed schizophrenic. But the most salient fact for many here, especially Oakland’s African American minority, is that Cowell is white and the Wilson sisters are black. …

Oakland police have found no tangible evidence of racial motivation behind Wilson’s death. But a dismayed African American community is demanding that the case be treated as a hate crime. In the absence of that evidence, the Alameda County district attorney enhanced the charges against Cowell this week, forming a case that could subject him to the death penalty if convicted, according to local news reports.

Okay, so they may execute the vicious crazed killer, but that’s not good enough.

It sounds like what Oakland black leaders really want, deep down, is to publicly lynch the crazy white killer as a turf marker that the valuable real estate of Oakland belongs to them. This should help modern Americans understand the psychology behind old-time lynchings.

The movement to have the case tried as a hate crime has brought election-year pressure to the city’s political class. Oakland’s white elected leaders are considering changing the legal definition of a racially motivated killing, lowering the threshold of evidence needed to bring such charges.

“It raises the question about our legal system and how we apply the rules of evidence,” said Mayor Libby Schaaf (D), who is white and was born in the city. “It may be time to recognize that if there is no explicit racial bias, but there is implicit racial bias, then maybe the burden of proof should shift to the defense.”

Fonts of conventional wisdom, such as Hillary Clinton, says that implicit bias is extremely prevalent among whites. So that means basically junking the basis of Angl0-American criminal law — the presumption of innocence — in cases of white-on-black crime accusations.

I suspect that quote sounds crazier than Mayor Schaaf intended. It may be a misquote or taken out of context. But, that does represent the logic of the next phase of the current tendency.

… But Oakland’s black population is being squeezed by the same economic forces that have propelled an African American exodus from much of the Bay Area. A community that once made up nearly half of Oakland’s population now accounts for barely a third — and its political power has diminished accordingly.

Oakland has some of the nicest weather in the country and is conveniently located near the center of perhaps the world’s richest megalopolis. So it’s one of the prime gentrification targets in America. It stays as black as it has stayed in part through the threat of black violence deterring non-blacks from moving in.

… In May, a white woman confronted two African American men on a sunny afternoon as they barbecued along the shores of Lake Merritt, a public place known as Oakland’s collective backyard. Calling it “my park,” she complained that the men were outside the designated areas where charcoal grills were permitted.

She called the police — and the phrase “barbecuing while black” was born.

The incident, captured by cellphone video, brought hundreds of people to Lake Merritt a little more than a week later for a “barbecue-in” against racism. There were T-shirts featuring “BBQ Becky,” as the woman became known.

And there were others reading simply “Gentrification,” a phrase that has come to signal both the ongoing renovation of Oakland neighborhoods and the accompanying cost-of-living increase that has made the city a difficult place to remain for many raised here. …

Demographic projections forecast that the quickening black exodus — mirroring a similar pattern in San Francisco — could result in African Americans making up only 16 percent of Oakland’s population a decade from now.

“We’re in a moment of unprecedented awareness and outrage, made worse by the pronouncements of our president,” said Schaaf, who is seeking a second term in November.

So let’s all unite behind me, Mayor Libby Gelman-Waxner, against Donald Trump, Evil White Man Incarnate.

The word Schaaf most often uses to describe her government’s approach to social issues is “vanguard.”

I had to go look up Mayor Libby Gelman-Waxner’s favorite word “vanguard” on Wikipedia:

I doubt that the nice Jewish mayor lady with the two kids and the pan-Catholic hubby Salvatore Fahey is really a racial Leninist, but she’s running for re-election against an Angry Black Woman. So she apparently feels the need to say stuff that is fairly nuts. But it’s not like anybody who matters is going to call her out on it, are they?

But what are the long term costs of our culture encouraging Establishment figures, like the Mayor of Oakland (Jerry Brown’s old job), to say crazy stuff? This just slowly normalizes the craziness.

As Lenin said in 1903, “He who says A must say B.” In truth, nobody has to say B. But saying A today makes it easier to say B tomorrow.
[Comment at Unz.com]