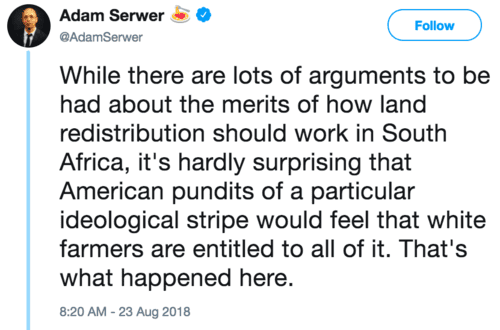 You can’t have land reform in South Africa on the scale the Economic Freedom Fighter party is demanding without breaking a few white farmers’ skulls.

Personally, being a crazed extremist, I support Nelson Mandela’s policy of no expropriation without compensation of South African farmland. South Africa still has a fair number of extremely rich white people, so if the government wants to, say, tax the old diamond and gold billionaires harder to pay for eminent domain on farmland, that seems reasonable. But that’s probably not going to happen since the diamond and gold zillionaires of South Africa tend to have international networks of influential allies, and are friends with the post-Zuma ANC, while the Boer farmers are friendless nobodies.

But Adam Serwer of The Atlantic thinks the Mandela policy is White Nationalist, in contrast to the more enlightened anti-racist Julius Malema policy of land grabs that worked so well for Robert Mugabe in Zimbabwe.

It’s interesting to see how far the War on Beckys has proceeded among white liberal intellectuals to reflect back on the now-bizarre sounding fact that South African-born J.M. Coetzee was awarded the 2003 Nobel Prize in Literature despite having to go into exile in Australia the year before because his 1999 novel Disgrace about the gangrape of a white lesbian farmowner by newly empowered blacks had angered the ruling African National Congress party.

The main character in Coetzee’s Disgrace, a #MeTooed professor specializing in Byron’s poetry, reflects after the attack on his daughter and himself:

It happens every day, every hour, every minute, he tells himself, in every quarter of the country. Count yourself lucky to have escaped with your life. …

A risk to own anything: a car, a pair of shoes, a pack of cigarettes. … Too many people, too few things. What there is must go into circulation, so that everyone can have a chance to be happy for a day. That is the theory; hold to the theory and to the comforts of theory. Not human evil, just a vast circulatory system, to whose workings pity and terror are irrelevant. That is how one must see life in this country; in its schematic aspect. Otherwise one could go mad. Cars, shoes; women, too. There must be some niche in the system for women and what happens to them.

Or maybe the Beckys just have it coming?

How long until a campaign starts to revoke Coetzee’s Nobel?