It’s good to see Bill O’Reilly again do some good coverage of the danger to Americans posed by illegal alien criminals allowed to run wild by the government.

In Tuesday’s program, he reminded viewers that a deported alien who returns is committing a felony and may receive up to two years in the slammer. (See Findlaw.com’s post “Illegal Reentry into the U.S. after Removal: Crime and Punishment”.) However, jail for the crime of reentry almost never happens. There are laws on the books to protect the populace, but the government will not enforce them.

BILL O’REILLY: In 2013, 60 percent of all the people ICE deported had been deported at least one time before — 60 percent. In that year alone, 2013, at least 220,000 aliens had multiple deportations. However, there are only 20,000 aliens currently incarcerated for immigration offenses, a fraction of those with multiple deportations, proving once again the feds will not enforce the law to its full extent. 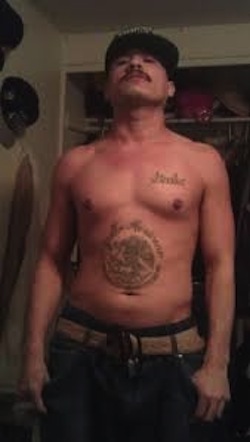 The subject of illegal alien crime is in the news because of the Friday murders of two California law enforcement officers apparently by a twice-deported Mexican illegal alien, Luis Enrique Monroy-Bracamonte (pictured with his Mexican flag tattoo, suggesting gang membership).

Jessica Vaughan of the Center for Immigration Studies appeared with O’Reilly to discuss details of the case and also wrote an article examining the ways in which the government once again failed to protect the public from dangerous foreign criminals.

The man accused in Friday’s horrific killing and carjacking spree near Sacramento, Calif., which resulted in the deaths of two sheriff’s deputies and the wounding of two others, is a citizen of Mexico who was deported twice previously, but who apparently has been living in the United States for more than a decade.

Thanks to fingerprint sharing made possible by ICE’s Secure Communities program (which DHS Secretary Jeh Johnson has indicated he wants to scale back), authorities were able to quickly determine that the man arrested had given them an alias. ICE has issued a statement saying that the accused is Luis Enrique Monroy-Bracamonte, and that he was deported in 1997 after a conviction in Arizona for possession of narcotics for sale, and again in 2001.

Unfortunately, the Secure Communities identification system seems to be the only part of our immigration system that has worked properly against this violent criminal.

According to news accounts, after he illegally re-entered the country after deportation, Monroy-Bracamonte lived and worked for years in Arizona, where he married Janelle Marquez Monroy-Bracamonte, reported to be a U.S. citizen. At some point they moved to the Salt Lake City, Utah, area, which is notably more hospitable to illegal residents. While working as a house painter and lawn mower there, Monroy-Bracamonte apparently racked up more than 10 misdemeanor traffic offenses and citations between 2003 and 2009 under an alias. In addition, he reportedly had a record of one traffic ticket and three small claims court filings for debt in his real name, also in Utah.

Had these offenses occurred in Arizona or other places where local law enforcement agencies are encouraged (and required in Arizona since 2012) to look into the identity and immigration status of lawbreakers, Monroy-Bracamonte might have come to the attention of local police and ICE a long time ago. But Salt Lake City Police Chief Chris Burbank has said such policies are “ridiculous” and “you actually increase crime when you enforce these kinds of laws.” Who looks ridiculous now? Chief Burbank also has been active with a (very small) group of police chiefs lobbying against immigration enforcement and for amnesty.

Monroy-Bracamonte appears not to be your average illegal worker off on a weekend road trip with his wife. They were quite well armed for their trip to Sacramento, packing an AR-15 assault rifle and at least two pistols. Monroy-Bracamonte killed Sacramento County deputy Danny Oliver by shooting him in the forehead as he approached their car, which was parked in the lot of a Motel 6 that is notorious for criminal activity, and where they were registered as guests. They led officers on a six-hour chase, during which Monroy-Bracamonte killed detective Michael David Davis, Jr., and wounded two others before officers used tear gas to smoke him out of hiding in a house in Auburn, Calif.

Photographs reported to be of Monroy-Bracamonte suggest that he is a member of the criminal gang known as Mexican Pride and associated with the Sinaloa drug cartel.

Unfortunately, ICE leadership under the Obama administration has pulled back on ICE’s highly effective anti-gang programs in the last few years, and American communities – and families – are now paying the price.

ICE’s National Gang Unit records show that 20 percent fewer gang arrests were made in 2013 than in 2012. And more and more of the ICE gang arrests have been occurring overseas rather than within the United States.

Whereas ICE agents once could work closely with local law enforcement agencies to target deportable gang members pro-actively with surge and street operations, now policies from ICE headquarters dictate that gang members are off-limits for enforcement until they are convicted of a serious crime. The result is that foreign gang members now can more easily avoid arrest, have little fear of immigration enforcement, are more likely to obtain benefits or relief from removal, are much less likely to face deportation, and are more likely to return after deportation. Liberal ICE detention policies have led to the release of gang members arrested by ICE investigators, which can enable them to escape prosecution. ICE agents also face limitations that are stricter than most other federal and local investigators on how they may use social media; such tools might well have enabled ICE to target Monroy-Bracamonte earlier.

So far ICE has been tight-lipped with information on Luis and Janelle Monroy-Bracamonte, referring questions to the Sacramento County Sheriff’s Department. The following questions remain to be answered:

The answers to these questions may guide lawmakers and local law enforcement agencies to adopt, or reinstate, more effective enforcement practices that prioritize public safety over protecting criminal aliens.