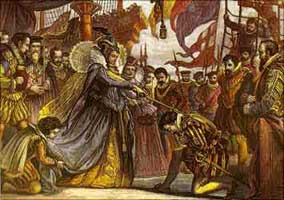 Francis Drake knighted on the Golden Hind: Then, Patriotism paid.

I have a fairly low opinion of the moral fiber (formerly fibre) of my country of origin, but apparently the ruthless spirit of Sir Francis Drake is not quite dead:

Asked recently in the House of Lords what naval or air-sea rescue contribution the British government would make to the refugee crisis in the Mediterranean, foreign minister Baroness Anelay replied:

“We do not support planned search and rescue operations in the Mediterranean. We believe that they create an unintended ‘pull factor’, encouraging more migrants to attempt the dangerous sea crossing and thereby leading to more tragic and unnecessary deaths.”

Ann points out that the U.S. has been adding to this "pull factor" by taking "migrants" who have made it to the Mediterranean island of Malta:

...see our seven years of stories about the mess we have created for Malta. We took 531 of Malta’s illegal aliens to the US in FY2014! (See that there were 434 cases and 531 individuals admitted, that means most were single adults.)

Some Somali young man who got on a boat in North Africa (probably Libya) is now being cared for with your tax dollars in your town.

John Derbyshire asked earlier this year: Will Europe’s “Camp Of The Saints” Produce A Humanitarian Crackup? This is the first sign I've seen that the answer might be "yes."

My suggestion: Europe should emulate the Elizabethan buccaneers and simply seize the North African coast to interdict smuggling, or at least a port, perhaps in anarchic Libya. Then African "refugees" could be dumped there and encouraged to walk home.

Similar action would cut the "pull factor" on the U.S. southern border too.