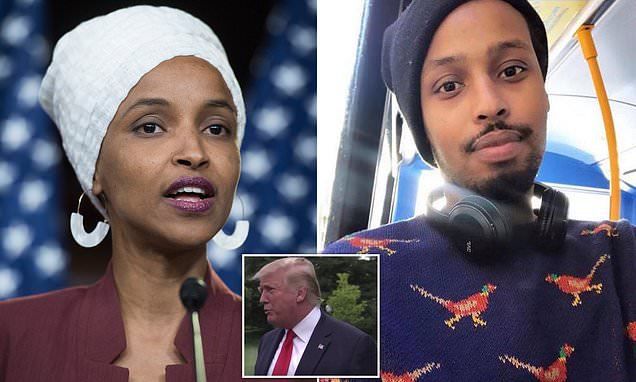 … On Wednesday, Mr. Trump drew attention to rumors that Ms. Omar had married her brother.

“Well, there is a lot of talk about the fact that she was married to her brother. I know nothing about it.”
— in remarks to reporters on Wednesday

Rumors that Ms. Omar had married her brother have been circulating since 2016, when she ran for state representative in Minnesota. No proof has emerged substantiating these claims.

In 2016, Ms. Omar released a statement denying the rumors as “absolutely false and ridiculous” and providing a timeline of her marital history.

According to that timeline, she applied for a marriage license with Ahmed Hirsi in 2002, but never finalized the application. In 2008, they ended their relationship “in our faith tradition.”

State records show that in 2009, Ms. Omar legally married Ahmed Nur Said Elmi, who she said was a British citizen. They obtained a religious divorce in 2011, according to her timeline, and Mr. Elmi returned to England.

She then reconciled with Mr. Hirsi and married him legally in January 2018, a month after she legally divorced from Mr. Elmi, according to The Associated Press. She and Mr. Hirsi have three children.

Last month, Minnesota’s campaign finance board found that Ms. Omar filed joint tax returns in 2014 and 2015 with Mr. Hirsi while she was still legally married to Mr. Elmi. She agreed to pay a fine and back taxes as a result of the amendments to her returns those years.

In 2016, a blog called PowerLine cited a now-deleted post on an internet forum that claimed Mr. Elmi is Ms. Omar’s brother.

In 2018, The Minneapolis Star Tribune reported that Ms. Omar showed a reporter cellphone images of documents from her family’s entry into the United States in 1995. They listed her father and siblings by order of birth, with Ms. Omar listed as the youngest of seven children. Mr. Elmi’s name did not appear in the documents. According to the couple’s marriage certificate, he is also three years younger than Ms. Omar, whose mother died when she was 2 years old.

No mention of the term “immigration fraud” in this NYT account. Clearly, it would be funniest if the man Rep. Omar legally married for the purpose of immigration fraud happened to be a very close relative — Somali family values at their finest — but it’s still immigration fraud if she entered into a sham marriage with a non-relative to get him into the country.

So, did Rep. Omar engage in immigration fraud or some other kind of fraud?

Beats me, but it sure doesn’t appear to have been disproved yet after 3 years.

But, that’s not the NYT’s point, the NYT’s point is that, much like story of how Rolling Stone happened to mistate certain factual details in its “A Rape on Campus” article, the story of Ilhan Omar’s various husbands is all very technical and boring. Why would you be interested in that?

In contrast, here are the headlines on a long new Daily Mail story about this hilarious case:

‘I am legally married to one and culturally to another’: How Ilhan Omar desperately tried to shut down accusations of bigamy amid claims she was briefly married to her BROTHER to ‘commit immigration fraud’ while she was still with her current husband
President Donald Trump suggested Rep. Ilhan Omar was ‘married to her brother’
Reignited an explosive rumor that first emerged during Omar’s 2016 campaign
Omar has failed to fully disprove the claims of bigamy and fraternal marriage
By THE SPECTATOR USA’S COCKBURN COLUMNIST
PUBLISHED: 08:11 EDT, 18 July 2019 | UPDATED: 12:41 EDT, 18 July 2019