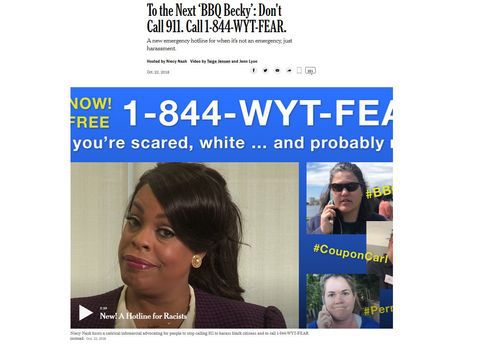 Below is a list of 39 known instances just this year when someone called the police to complain about black people doing everyday activities:

Thirtynine false positives in a country of merely 327 million!

How many false negatives have there been this year when a white woman was violently victimized because she didn’t call 911? Hmmhmmhmmhh … I’m not aware of such a concept. Frankly, the very idea of a Type II error sounds racist. Anyway, what’s a few dead Beckys compared to winning the midterm elections?

This media campaign is going to help the Democrats win the midterms, right? Right? The press is carrying out this broad effort to racially vilify white women as part of a Machiavellian masterplan based on scientific research to propel Democratic candidates upward and onward, isn’t it? I mean, I haven’t heard the details of the careful calculations and behind-the-scences planning that went into this coordinated push, but it must have taken place, right? The media isn’t just hating on white women because it feels good, man. I mean, that would be just plain stupid to let feelings of racist resentment alienate the crucial white women swing bloc of voters at the last moment, right?