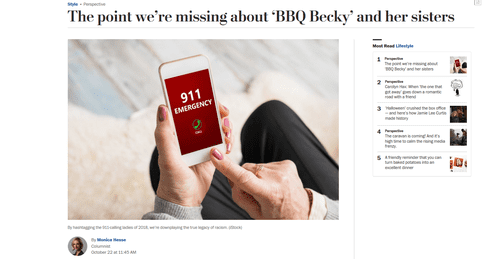 Going back perhaps to the 1990s, “Becky” is a racial slur epithet for a white woman. In 2018, the prestige press has turned “BBQ Becky” into a racial slur epithet for a white woman who call 911 over a seemingly threatening situation that then turns out to be a Type I false positive error. In the Washington Post Style section today, a white woman columnist complains that calling white women who make Type I errors involving blacks don’t deserve being slurred in a mildly amusing alliterative fashion. Slurring isn’t good enough for them!

The point we’re missing about ‘BBQ Becky’ and her sisters

By hashtagging the 911-calling ladies of 2018, we’re downplaying the true legacy of racism.

… A few days before #GolfcartGail, there was #CondoCathy — also known as #ApartmentPatty — who called police on a black neighbor as he tried to enter his own building. Just before that was #CornerstoreCaroline, who called the cops on a 9-year-old who, she falsely claimed, had grabbed her butt in a market (security-camera video revealed his backpack had simply brushed against her). #PermitPatty’s target was an 8-year-old selling bottled water, #NewportNancy’s was a woman smoking a cigarette in a parking garage. The list goes all the way back to a California woman who, last spring, phoned police on two black men grilling in the dedicated grill zone of a public park. She became #BarbecueBecky — Becky being the withering shorthand for clueless white women everywhere.

The message: Don’t be a Barbecue Becky. …

And yet, something about the viewing experience — or at least the hashtag packaging of it — was starting to bother me. So I called a few people to talk through why.

“It’s a really gendered response,” offers Charles McKinney, a professor of history and Africana studies at Rhodes College. “When white men engage in this activity, very rarely do we give them cutesy nicknames,” he notes, with exception to the rare #CouponCarl. “There’s an insipid inclination to downplay these instances when the perpetrators are white women.”

Okay … uh, is Charles McKinney saying that white women are derided and punished too much or too little for worrying about their personal safety?

McKinney’s argument is that these incidents aren’t, generally, women simply being dopey or clueless. They’re examples of racism, and the way that people of color can be harassed while going about their daily lives.

Presenting these 911 callers with jaunty nicknames can be a way to deal with that via dark humor. And that was the origin of many of these hashtags — black Twitter users potently jabbing at a terrible reality.

But as the nicknames spread into broader Twitter population, by people who simply wanted something to mock, the side effect was dilution.

Okay, according to Ms. Hesse, the problem is that white women aren’t being mocked viciously enough.

I was just thinking to myself, wow, nobody has mentioned Emmett Till in 10 or 15 minutes, and then … Bingo, there’s his name again!

, to the wrongful conviction of the Central Park Five,

We are going to be hearing about the sweet innocent Central Park Five over and over for the next year due to an upcoming miniseries on it.

which resulted in innocent boys spending years in prison.

Yeah, that Central Park Jogger, what a racist for accusing those five blameless boys! (Oh, wait, she didn’t actually accuse anybody of anything because, when she surprisingly survived her horrific attack, she had lost all memory of the events. But she was still white, so let’s lump her in as another BBQ Becky.

In the post-Civil War South, white women were “segregation’s constant gardeners,” as Elizabeth McRae writes in a new book about the politics of white supremacy. White women built the monuments to Confederate generals; white women harassed black children as they tried to integrate schools. Racist white men burned crosses and performed lynchings, but their rationale was often tied up in a twisted logic related to protecting the purity of white women.

All those deluded white women and their accusations that men are trying to paw them … SMH. Don’t Believe Women! (Unless they are accusing Republican Supreme Court nominees, then Believe Women.)

So why are we hashtagging the 911-calling ladies of 2018? “The impulse is to make them into a ridiculous story,” says Vann Newkirk, a staff writer at the Atlantic who writes about politics, and often race. “But that’s the wrong impulse. The right impulse is, these are deeply disturbing stories. There are ridiculous parts to them, but always one step away from something horrifying.”

The reason we can roll our eyes at #GolfcartGail is because the story ends with a wah-wahhhh. But plenty of other stories — Tamir Rice, John Crawford — have started out exactly the same way, with a bystander dialing 911, and they have ended in terror. Not with a wah-wahhhh but with a bang-bang. …

Monica Hesse is a columnist writing about gender and its impact on society. For more visit wapo.st/hesse.

If you See Something, Beckys, Say Nothing.