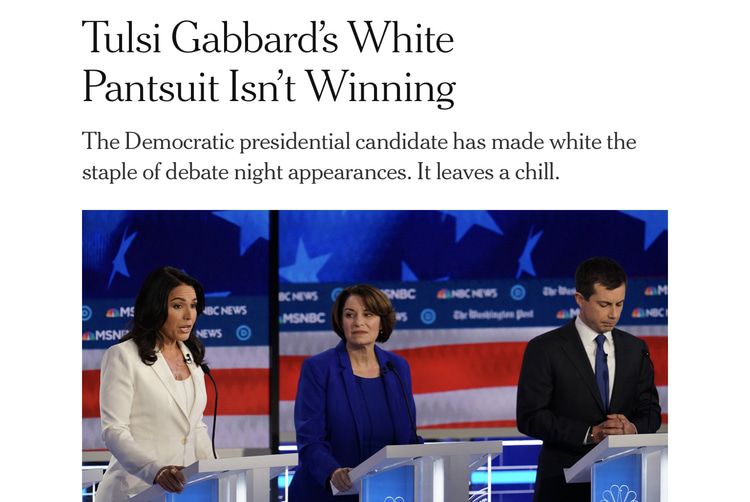 The Democratic presidential candidate has made white the staple of debate night appearances. It leaves a chill.

What has happened to the white pantsuit? Watching the Democratic debate held in Atlanta on Wednesday night, it was one of the questions that stuck with me. It’s not as important as Medicare for All, obviously, or economic disparity. But given the role white pantsuits have played in the national conversation for the last three years, it’s not immaterial. (No pun intended.)

It was only a mere presidential election cycle ago, after all, that the white suit was thrust into the limelight as a symbol of so much: women’s advancement and opportunity, and the possibility of change. That it became not an item of clothing but a placeholder in a continuum that began with the suffragists, continued through Geraldine Ferraro, and resonated today. That it sparked mountains of text and tweets and entire Facebook groups dedicated to celebrating its meaning and urging adoption — and then designating it the outfit of the opposition.

That Hillary Clinton made it a cause célèbre, #WearWhiteToVote made it a hashtag, Melania Trump made it a pointed subject of speculation, and the women of the 116th Congress made it a gauntlet....

Now Representative Tulsi Gabbard of Hawaii, underdog presidential candidate, has, by all indications, made it her uniform. And yet no one really seems to care.

Wednesday evening marked the third time Ms. Gabbard appeared in a white pantsuit during a debate.

But it most probably also has to do with the fact that Ms. Gabbard herself doesn’t seem particularly interested in connecting with the suffragists, but rather is using her white suits to tap into another tradition, latent in the public memory: the mythical white knight, riding in to save us all from yet another “regime change war.”

Her white suits are not the white suits of Ms. Clinton, nor even the white of Ms. Williamson, whose early appearances in the shade often seemed tied to her wellness gospel and ideas of renewal and rebirth. Rather, they are the white of avenging angels and flaming swords, of somewhat combative righteousness (also cult leaders). And that kind of association, though it can be weirdly compelling, is also not really community building. It sets someone apart, rather than joining others together. It has connotations of the fringe, rather than the center.

Vanessa Friedman is The Times’s fashion director and chief fashion critic. She was previously the fashion editor of the Financial Times. @VVFriedman

In contrast, I would guess that Rep. Gabbard wears white frequently to show off her dark complexion to remind Democrats that she isn’t wholly white.