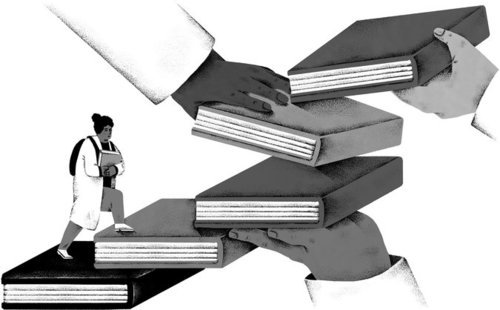 NYT: "The ‘Benefits’ of Black Physics Students:" Is This a Parody?

An oped in the NYT:

“The ‘Benefits’ of Black Physics Students”

LAST week during oral arguments in Fisher v. University of Texas, a case about the constitutionality of race-conscious admissions policies, Chief Justice John G. Roberts Jr. posed two questions: “What unique perspective does a minority student bring to a physics class?” Followed by: “I’m just wondering what the benefits of diversity are in that situation?”

Then Justice Antonin Scalia deepened an already painful wound when he questioned the abilities of black students to succeed at fast-paced institutions, an idea rooted in the widely discredited “mismatch theory.” Their questions left many black scientists, myself included, reeling from the psychological blow.

As a black woman and astrophysicist, I immediately became defensive of my own worthiness, and that of the black students I mentor and support every day. I wanted to scream my credentials from the rooftops: I have physics degrees from two historically black universities and a Ph.D. in astrophysics from an Ivy League institution.

I’ve thought a lot about who winds up in science classrooms and whose perspectives are cultivated. I went from sitting in a classroom full of brilliant black physicists-in-training to one in which I was the only person of color pursuing the same subject.

Of course I deserved to be an astrophysicist, and my achievements prove it; but that’s not the point. I was worthy the first day I walked into the classroom.

I had come from a tiny Christian high school where I didn’t get nearly as much scientific preparation as my dream to be a professional stargazer required. Yet there were people at Norfolk State University who believed in me and welcomed me. When I walked through the doors, my professors asked me if I wanted to understand physics, not what “unique perspective” I might bring. I did want to learn physics, so they told me that I was in the right place.

Isn’t she missing the point? Wouldn’t her having starred in physics at Norfolk State instead of flunking out of physics at Caltech support Scalia’s question?

It would seem that the best rebuttal to Chief Justice Roberts’s query about the “benefits of diversity” is to describe a scene where a black student brought a “unique perspective” that improved the learning experience for everyone.

Okay, so where’s the example?

But the truly insidious part of his argument is not predicated on the need to furnish examples. Obviously, black students march into classrooms all over this country and blow physical concepts out of the water with their individual intellects. The truly damaging part of Chief Justice Roberts’s question is the tacit implication that black students must justify their presence at all.

Black students’ responsibility in the classroom is not to serve as “seasoning” to the academic soup. They do not function primarily to enrich the learning experience of white students.

Black students come to the physics classroom for the same reason white students do; they love physics and want to know more. Do we require that white students justify their presence in the classroom?

Do we need them to bring something other than their interest?

Contrary to Chief Justice Roberts’s implication, science is not some unchanging world of pure objectivity and fact. …

And physics isn’t just about the dry acquisition, memorization and regurgitation of equations. Think about something as basic to physics as Newton’s laws. Before they can be understood, they must be conceptualized.

Instead of stating “force equals mass times acceleration” and moving on, a good instructor will ply her students with real-life examples of how the application of force to a mass produces acceleration. Students must create relatable examples that allow them to practice and perfect their use of these tools before expanding them out into the larger, untested world.

For example, “Calculate the total force experienced by rapper 50 Cents as he got shot by 9 bullets each with a mass of …”?

… Closing that door to students of color unless they can justify their presence is closing the door to the kinds of creativity that can be shown only after a student has mastered basic skills.

A physics class should interrogate and transfer the canon of scientific knowledge.

Have you ever noticed how the word “interrogate” has been a favorite action verb of postmodern academics for at least a quarter of a century? You might think that a word so historically associated with the Gestapo and KGB might be considered kind of “triggering,” but only if you worry that you might wind up being the Whom instead of the Who in an interrogation. Evidently, a lot of academics have no concerns in that regard.

Those students will go on to consider the many unanswered questions at the frontiers of what is known about the universe. …

We can only hope.