For her first Netflix series, Shonda Rhimes and her team infuse period-drama escapism with modern-day sensibilities.

… The prolific showrunner [Shonda Rhimes] does not consider herself an avid romance reader, but she devoured Julia Quinn’s “Bridgerton” series about the moneyed marriage market of 19th century England, and like the fan, she did not understand why more books of that genre have not been adapted onto the screen, while Jane Austen novels have been wrung dry. 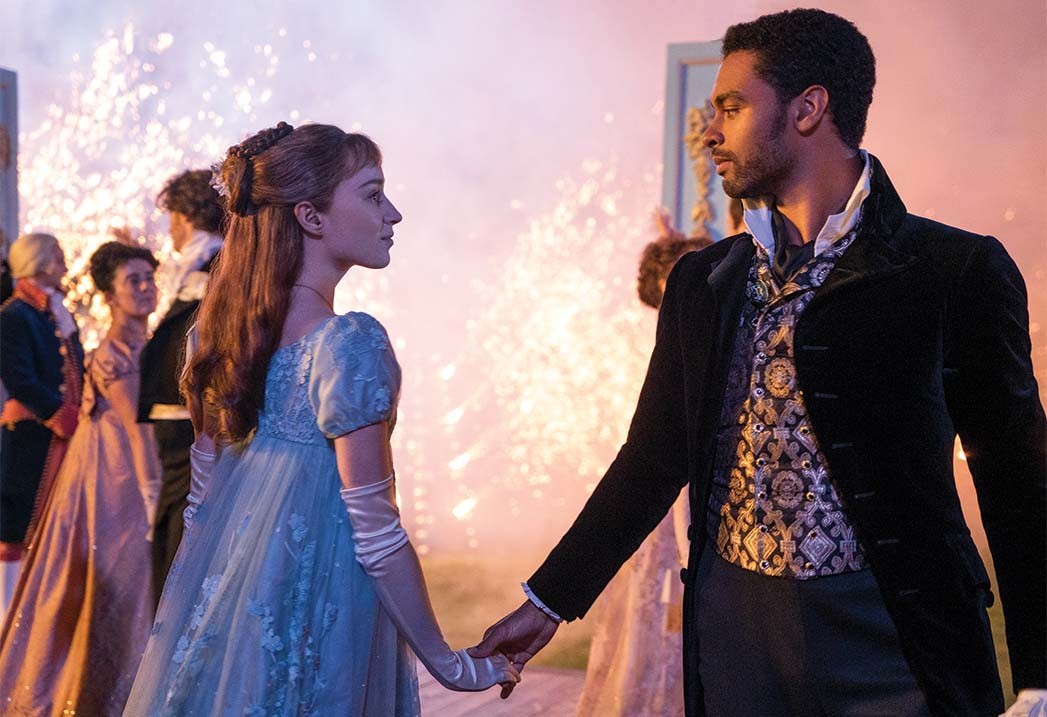 Because Jane Austen novels are better than romance novels?

The show is a career landmark for Rhimes, the first series in her exclusive, nine-figure deal with Netflix after a string of hits for ABC made her one of TV’s most successful showrunners. Rhimes created “Grey’s Anatomy,”

When I used to watch TV, I’d occasionally land upon Grey’s Anatomy. I’d say, “Oh, look, there’s Sandra Oh, she was on Arliss. Didn’t she used to be married to director Alexander Payne?” And then about five minutes later: “This show is really stupid.” Click.

“Private Practice” and “Scandal,” and was an executive producer for several other shows on the network, including “How to Get Away With Murder,” before signing her multiyear pact with Netflix in 2017.
With its speedy pacing, fervent monologues and strong matriarchal characters, “Bridgerton” bears Rhimes’s unmistakable imprint. But the person tasked with bringing the show to life was her protégé, the showrunner Chris Van Dusen, who started as Rhimes’s assistant on “Grey’s Anatomy” 15 years ago and eventually rose to co-executive producer of “Scandal.” …

The show aims to be a vibrant and indulgent dose of escapism, setting luxurious ball gowns against a backdrop of lush garden parties as the young ladies and gentlemen of Regency-era England try to find love — or at least a bearable spouse. …

But Van Dusen did not want a story that was informed exclusively by the 19th century, which he worried would make “Bridgerton” feel too uptight. Instead, he imagined a show that reflected today’s society through a racially diverse cast and lustful scenes shot from the “female gaze.” The result reflects the trappings of the early 1800s — bows and curtsies, bushy sideburns, pushed-up bosoms — while diverging from the historical reality enough to excite today’s audience. …

One of the show’s most dramatic departures from its period is immediately apparent: Black actors star not only as landowning aristocracy — including Daphne Bridgerton’s love interest, the Duke of Hastings — but as the queen herself, a majestic but mercurial sovereign played by Golda Rosheuvel.

Cast diversity is another of Rhimes’s signatures. But in this case, given the historical setting and the overwhelming whiteness of most 19th-century costume dramas — consider almost any Austen adaptation — it raised a pertinent question: How and to what extent should “Bridgerton” address race?

The solution came from Van Dusen, who had learned that some historians believe that the reigning queen at the time, Queen Charlotte, was the descendant of a Portuguese royal family with African ancestry. (The long-running debate over Queen Charlotte’s race was revived when Meghan Markle got engaged to Prince Harry in 2017, which led journalists and historians to consider whether she would be the first Black British royal.)

Queen Charlotte was a redhead from North Germany. If you search on her name, you see a lot of pictures based on Allan Ramsay’s 1761 portrait that looks a bit like Maya Rudolph, the mulatto (daughter of singer Minnie Riperton, who who died young of cancer and her producer Paul Rudolph) who plays Kamala Harris on Saturday Night Live.

On the other hand, the Wikipedia article about her shows many contemporary pictures by well-known artists in which she appears to be a typical northern European woman. 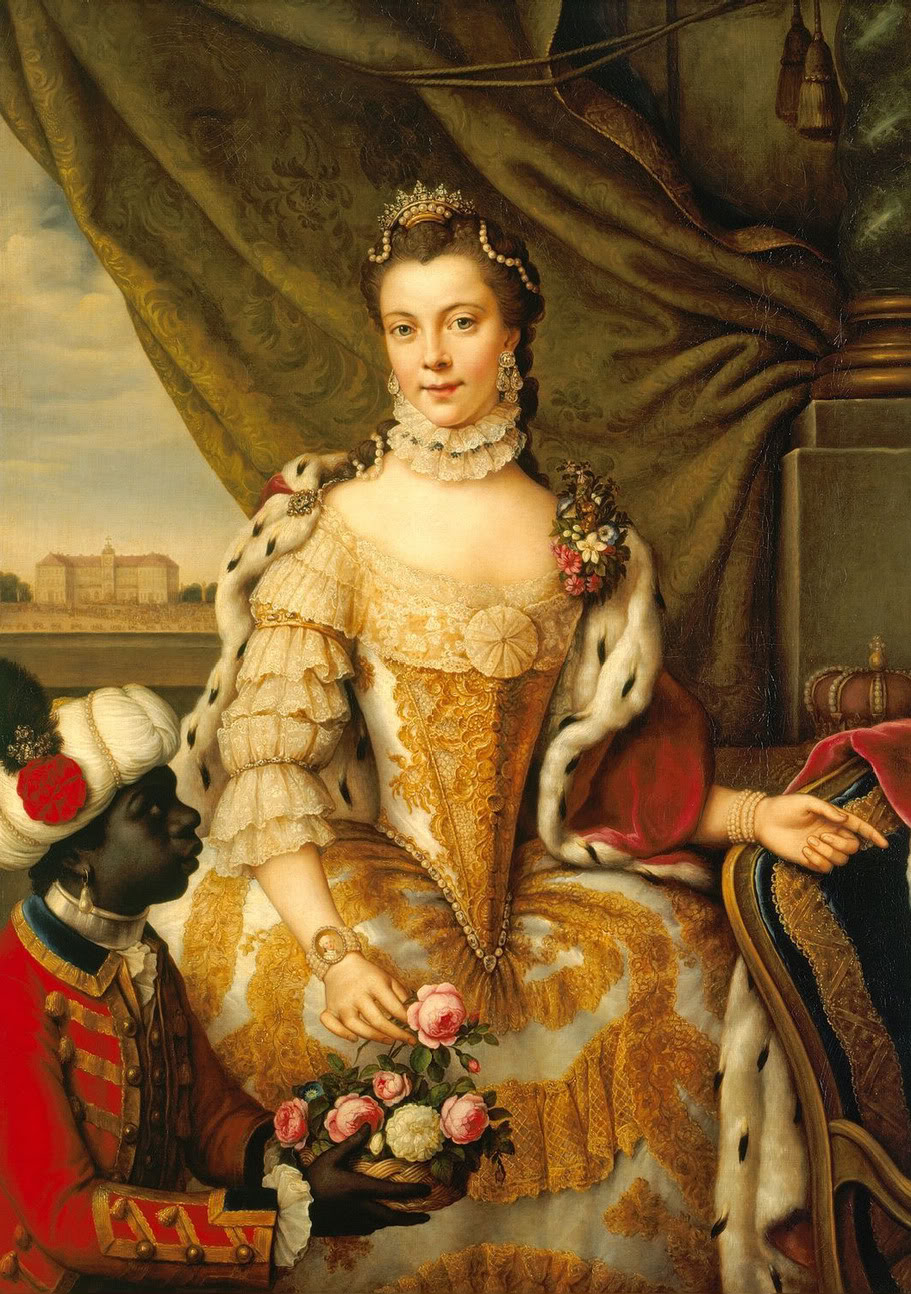 She was the youngest daughter of Duke Charles Louis Frederick of Mecklenburg (1708–1752; known as “Prince of Mirow”) and of his wife Princess Elisabeth Albertine of Saxe-Hildburghausen (1713–1761). Mecklenburg-Strelitz was a small north-German duchy in the Holy Roman Empire….

Since 1940, there have been evolving claims about the supposed African ancestry and ethnicity of Charlotte.[61] Critics of these claims point out that dozens of portraits and descriptions depict her appearance as a typical Northern European woman,[62] that there is no evidence that her distant ancestor Margarita de Castro e Souza was “black” or from a “black” Portuguese noble family, that her even more distant ancestor Madragana was likely Mozarab and not Moorish,[63][64][65][66][67] and that Charlotte shared descent from Madragana with a large proportion of European royalty, including her husband, King George III.[68]

Queen Charlotte was 15 generations after Madragana, who, in any case, was likely an Iberian Christian.

In the movie The Madness of King George, Queen Charlotte is played by Helen Mirren, who is usually considered to be a fine specimen of a white woman.

The NYT rambles on:

Van Dusen’s idea was to base the show in an alternative history in which Queen Charlotte’s mixed race heritage was not only well-established but was transformative for Black people and other people of color in England.

“It made me wonder what that could have looked like,” he said. “Could she have used her power to elevate other people of color in society? Could she have given them titles and lands and dukedoms?”

Basically, that’s what African-Americans want in the George Floyd Era: to be given “titles and lands and dukedoms.” As a commenter recently pointed out, the current outrage over cases of blacks being arrested merely for breaking the law is redolent of their privileged status: how dare some white trash cop arrest one of nature’s noblemen just for some technical infraction, such as driving drunk or passing counterfeit bills or sexual assault? Don’t they understand the meaning of Privilege?

When Netflix began releasing news about “Bridgerton” and its cast, many referred to the approach as colorblind casting, which was irksome to the creators. “That would imply that color and race were never considered,” Van Dusen said, “when color and race are part of the show.”

Though it is not explained until the middle of the season, the character of Queen Charlotte — who is brought to life with towering coiffures, pet Pomeranians and a hunger for gossip — provides the explanation for the diverse gentry. It was she who bestowed nobility upon the Duke of Hastings’ predecessors, positioning him to inherit a dukedom.