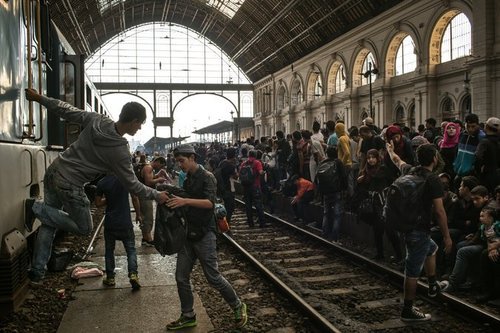 NYT: "Europe Must Plan for Juggernaut;" Such As: "Lie Back and Think of EU"

A Migration Juggernaut Is Headed for Europe

European leaders probably don’t want to hear this now, as they frantically try to close their borders to stop hundreds of thousands of desperate migrants and asylum seekers escaping hunger and violence in Africa and the Middle East. But they are dealing with the unstoppable force of demography.

Fortified borders may slow it, somewhat. But the sooner Europe acknowledges it faces several decades of heavy immigration from its neighboring regions, the sooner it will develop the needed policies to help integrate large migrant populations into its economies and societies.

That will be no easy task. It has long been a challenge for all rich countries, of course, but in crucial respects Europe does a particularly poor job.

Perhaps it’s not surprising, as a recent report by the Organization for Economic Cooperation and Development found, that it is harder for immigrants to get a job in European Union nations than in most other rich countries. But that doesn’t explain why it is also harder for their European-born children, who report even more discrimination than their parents and suffer much higher rates of unemployment than the children of the native-born.

S0, immigrant resentment and hostility just gets worse in the second generation? Maybe Europe should plan for that, such as by letting in fewer fathers of future terrorists and welfare grifters?

Rather than fortifying borders, European countries would do better to improve on this record. The benefits would be substantial, for European citizens and the rest of the world.

Over the summer, as Hungary hurried to lay razor wire along its southern border and E.U. leaders hashed out plans to destroy smugglers’ boats off the coast of North Africa, the United Nations Population Division quietly released its latest reassessment of future population growth.

Gone is the expectation that the world’s population will peak at nine billion in 2050. Now the U.N. predicts it will hit almost 10 billion at midcentury and surpass 11 billion by 2100. And most of the growth will come from the poor, strife-ridden regions of the world that have been sending migrants scrambling to Europe in search of safety and a better life.

You know, there’s a country close to Palestine that seems to do a pretty good job of stopping the “unstoppable force of demography.” Maybe Europeans could try to learn from how the Palestinians’ neighbor does it.

… “With Africa’s population likely to increase by more than three billion over the next 85 years, the European Union could be facing a wave of migration that makes current debates about accepting hundreds of thousands of asylum seekers seem irrelevant,” wrote Adair Turner, the former chairman of Britain’s Financial Services Authority and now chairman of the Institute for New Economic Thinking.

In other words, Europe, lie back and try to enjoy it. But at the same time: dig faster!

Europe’s initial reaction to the flow has been mixed, at best. Germany, notably, has committed real resources to help cover the basic needs of hundreds of thousands of refugees it expects to welcome this year. But that is hardly the spirit across the board. And Europe is still mostly focused on steeling its borders, even to the point of closing many of its once free-flowing internal boundaries.

European countries are closing their internal boundaries because because the EU has done such a miserable job of closing its external boundary. (A serious question: Is this simple concept widely understood, or is it some amazing insight that I need to propound more often?)

Better options exist. The rich history of immigration around the world suggests that new migrant populations could be integrated into the European social fabric to the benefit of Europeans, the new immigrants and even the regions of the world they left behind. …

Rich countries with lower fertility rates and older populations benefit from young migrants of working age, who help rev up their slowing labor supply. From 2000 to 2010, migrants accounted for nearly two-thirds of European labor force growth.

Yeah, like in Spain, which took in huge numbers of culturally compatible immigrants in the 2000s from Latin America. How’d that strategy work out for Spain anyway?

Good news! Spain’s youth unemployment rate dropped from 48.9% in June to only 48.6% in July, and it hasn’t even been 7 years yet since the Crash.

Despite popular perceptions to the contrary, migrants are often highly educated, and they generally do not burden the public purse.

Especially when you just accept anybody with a smartphone and no documents.

But the overall task is greater, to eventually close the socio-economic gaps between immigrants and their descendants and native Europeans. “What matters is the integration of the migrants in receiving countries,” Mr. Scarpetta said. “This will not occur by itself.”

No, it will of course requiring hiring millions more soft major diversicrats to manage the process.

In the end, the choice is clear. Europe’s best shot at prosperity is to build upon the diversity that immigration will bring.