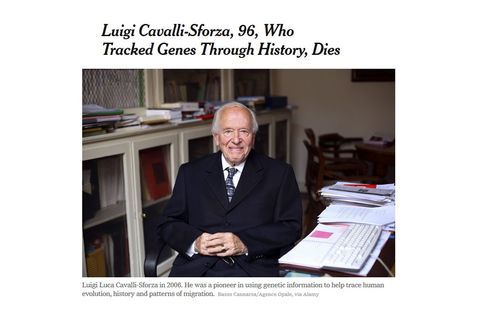 Millions of people in recent years have sent off samples of their saliva to DNA-testing companies like 23andMe and Ancestry.com hoping to find out where their forebears came from and whether they have mystery relatives in some distant land, or even around the corner.

The trend itself can be traced to an Italian physician and geneticist, Luigi Luca Cavalli-Sforza, who died on Aug. 31 at his home in Belluno, Italy, at 96. He laid the foundation for such testing, having honed his skills more than 60 years ago using blood types and 300 years of church records to study heredity in the villagers of his own country.

…David Reich, a professor of genetics at Harvard Medical School, said in an interview that Dr. Cavalli-Sforza was the first scientist to predict that there would be “enough information in genes to determine where people came from in the world and who they’re most closely related to.”

“A fair number of reasonable people,” he added, “thought it wouldn’t be possible.”

… Cultural traits and how they spread fascinated him, and late in life he began to study variations in hand gestures in different parts of Italy.

… Overall, the genetic studies revealed, it was the farmers themselves who moved, taking their knowledge of agriculture with them. …

Dr. Cavalli-Sforza also studied genetic changes in the Y chromosome, the determinant of male gender, which is passed from fathers to sons. 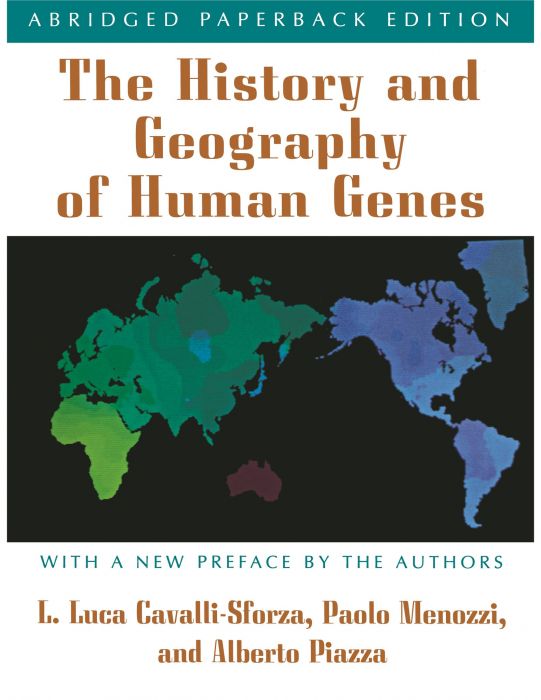 It appears that the word “sex” is being phased out of polite society in favor of “gender,” even when discussing the male sex chromosome.

His work, along with that of colleagues, indicated that genetically there is no such thing as race: Individuals within a population group differ genetically from one another just as much as they differ from people in other groups. He denounced efforts to suggest that superficial traits like skin color or hair texture had any underlying connection to intelligence, behavior or character.

But he was kidding, as the maps on the front covers of both versions of his History and Geography of Human Genes show.

In 1973, Dr. Cavalli-Sforza publicly debated William B. Shockley, a Stanford engineering professor who had shared the 1956 Nobel Prize in Physics for inventing the transistor and who had become notorious for declaring that blacks were less intelligent than whites.

“The History and Geography of Human Genes,” a 1,000-page account of where humans originated and where they went, was Dr. Cavalli-Sforza’s masterwork.
Dr. Cavalli-Sforza came under fire from some quarters after proposing, in the 1990s, what he called a Human Genome Diversity Project. …

Although many scientists favored the plan, opponents said it smacked of colonialism, racism and “biopiracy” …

He earned a medical degree from the University of Pavia in 1944. Studying medicine during World War II might have saved his life, he later told colleagues: Italy did not draft medical students.

Dr. Cavalli-Sforza became an assistant professor at the University of Cambridge in Britain in 1948 and worked with Ronald Fisher, a top expert on bacterial genetics and statistics.

Pretty much all roads lead back to Fisher.

… But humans interested him more than bacteria did. A student of his, a priest named Antonio Moroni, told him that Roman Catholic parishes in Italy kept detailed marriage records that went back generations; some included notations of marriages between cousins. Dr. Cavalli-Sforza realized that the records, compiled in books, could be a gold mine. For one thing, the marriages between relatives could reveal the effects of inbreeding. …

From 1966 to 1985 he made 11 trips to Africa to study Pygmies, who were still hunter-gatherers at the time. He later edited and wrote part of a book about them and their culture.

“These people are exactly like me — brothers, really,” he told Dr. Feldman in the video interview. “And yet they were living in such a completely different way.”

His experience with the Pygmies had a profound effect on his thinking, igniting a determination to “understand why cultures can be so different,” he said.

“He was adopted into a Pygmy extended family and was very proud of it,” said Mary-Claire King, a geneticist at the University of Washington. “They gave him a name. He told me it translated as ‘Great White Elephant.’ He just loved living with the Pygmies.”