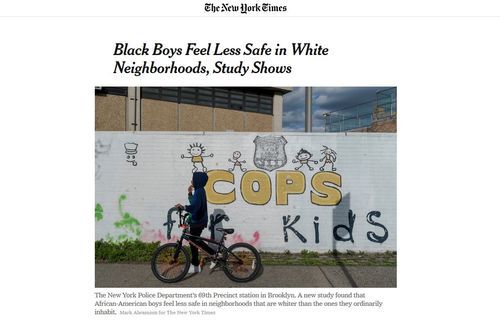 … A new study found that African-American boys feel less safe in neighborhoods that are whiter than the ones they ordinarily inhabit.

So what did the study find out about how safe white boys feel in neighborhoods that are blacker than the ones they ordinarily inhabit?

They did ask, didn’t they?

Many black boys have been racially profiled, arrested or even killed in white neighborhoods because the residents were afraid of them. A new study suggests the boys are afraid, too.

The study, which was released on Monday, found that “African-American boys experience a decreased sense of safety” when in neighborhoods with a larger white population than areas they normally frequent.

But doesn’t Raj Chetty keep telling us that we must move black youths from segregated places far from all economic activity, such as Washington DC, Oakland, Brooklyn and Harlem, the LAX area, and the Chicago lakefront, to more privileged places like Ferguson and Dubuque?

Black boys “will expect increased scrutiny, surveillance and even direct targeting as they traverse whiter spaces,” the study found. Black girls did not report feeling significantly less safe in such areas.

To carry out the study, researchers at Ohio State University gave smartphones enabled with GPS technology to 506 black youths in Columbus ages 11 to 17, 250 of whom were boys. Five times a day, the children were sent a small survey that asked them if they felt safe in the place they were in.

The study came at a time of widely publicized incidents in which black children were reported by white people to the police for selling water, mowing the lawn and playing in the yard, selling hot dogs, playing at a pool, and other ordinary activities. The episodes reflect a reality in which many black children are forced to become aware of racism at a younger age than their white counterparts...

In contrast, when white children leave their houses, they are more often going to places that look like their home neighborhoods. “Whites are more likely to self-segregate and keep their experiences confined to what looks like their own neighborhoods,” Dr. Browning said.

So, there is no need to study how safe white children feel whatsoever, you racist bigots. Don’t you understand that blacks are Whos and white children are Whoms?