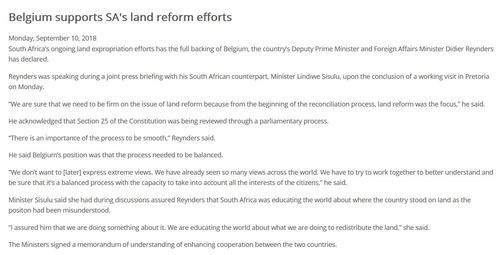 The looters' government in South Africa has succeeded in driving its country into recession as plans continue to steal land from white farmers [South Africa in recession for first time since 2009; rand slumps, by Mfuneko Toyana and Nomvelo Chalumbira, Reuters, September 4, 2018]. Despite the best efforts of journalists, the world knows of the South African government's plans, and randomly seizing land from people has a way of undermining investor confidence, whatever the happy face publications like Bloomberg put on what is disingenously called "land reform" [The promise and peril of South African land reform, by Noah Smith, Bloomberg, September 7, 2018].

Still one may wonder how the South African government intends to get away with it. After all, especially after the catastrophe in Zimbabwe, one might expect that the government is concerned about the reaction of Western powers.

The answer is simple. The same governments that are flooding their own nations with Third World immigrants not only support what the South African government is doing, they want European taxpayers to subsidize it.

Reynders was speaking during a joint press briefing with his South African counterpart, Minister Lindiwe Sisulu, upon the conclusion of a working visit in Pretoria on Monday.

“We are sure that we need to be firm on the issue of land reform because from the beginning of the reconciliation process, land reform was the focus,” he said.

He acknowledged that Section 25 of the Constitution was being reviewed through a parliamentary process.

“There is an importance of the process to be smooth,” Reynders said.

He said Belgium’s position was that the process needed to be balanced.

“We don’t want to [later] express extreme views. We have already seen so many views across the world. We have to try to work together to better understand and be sure that it’s a balanced process with the capacity to take into account all the interests of the citizens,” he said.

It's important to note that Belgium, like the United Kingdom, is ostensibly under a "conservative" government. Prime Minister Charles Michel is aligned with the francophone "Reformist Party," which is usually described as center-right. A major force in the country is the supposedly nationalist New Flemish alliance, which wants independence for the Dutch speaking area of the country. Needless to say, the fate of the Afrikaner people, most of whom derive from Dutch settlers, is of interest to many people in both the Netherlands and Flanders. The Vlaams Belang, a more stridently nationalist party, may also find the Belgian government's activities of interest.

Some conservatives are attacking South Africa because of its supposedly "communist" policies. They note, quite accurately, that the governing African National Congress was supported by the Soviet Union. Yet what is truly dangerous about South Africa is that what is happening is fully supported by international finance and the "capitalist" establishment. It is also being subsidized by Western taxpayers.

The International Monetary Fund (remember when progressives used to be opposed to that?) is backing "land reform." The aforementioned center-right Belgian government is sending 30 million euros to help faciliate the process [Belgium pledges €30m to SA for land reform, by Jan Gerber, News24, September 10, 2018]. And of course, the United Kingdom, which did so much to dismantle Rhodesia and the old South Africa, is pledging more foreign aid for Africa [Britain will use aid budget to boost trade in Africa-PM Theresa May, The Star, August 28, 2018].

What is happening is not really some "socialist" plan of redistribution. It's being pushed by the very centers of power in the capitalist, Western world. The ruling elite of the West is the core problem. And what they are doing to white South Africans is what they intend for Western peoples in Europe and North America.