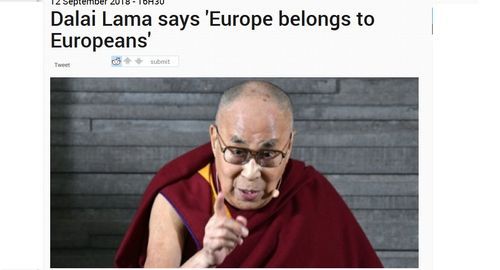 The Tibetan spiritual leader, the Dalai Lama, said Wednesday that "Europe belongs to the Europeans" and that refugees should return to their native countries to rebuild them.

Speaking at a conference in Sweden's third-largest city of Malmo, home to a large immigrant population, the Dalai Lama -- who won the Nobel Peace Prize in 1989 -- said Europe was "morally responsible" for helping "a refugee really facing danger against their life".

"Receive them, help them, educate them... but ultimately they should develop their own country," said the 83-year-old Tibetan who fled the capital Lhasa in fear of his life after China poured troops into the region to crush an uprising.

"I think Europe belongs to the Europeans," he said, adding they should make clear to refugees that "they ultimately should rebuild their own country".

The Dalai Lama is of course the spiritual leader of Tibet, a culturally distinct area of China that the People's Republic has slowly been Sinicizing since 1950. This process includes importing large numbers of Han Chinese to make Tibetans a minority in their own country, cracking down on expressions of Tibetan heritage and and history, and marginalizing the Tibetan language. There is no mystery about any of this and Western critics are quite willing to accurately describe what is happening as "cultural genocide." You can even read an objective article about it on the normally outrageously biased Wikipedia.

Of course, the reason you can call it what it is is because there are no white people involved and no way to blame what is happening on "white privilege." The same process is taking place in North America and Europe. However, resistance by Tibetans is cheered as spunky and heroic by Western media while resistance by Europeans and North Americans against dispossession is marginalized as racist. From an objective point of view however, both populations are resisting the same thing.

This is not the first time the Dalai Lama has spoken against flooding Europe with refugees. In 2016, he stated too many refugees were heading to Germany and said it must not become "an Arab country" [Dalai Lama: 'Too many' refugees in Germany, nation 'cannot become an Arab country,' by Douglas Ernst, Washington Times, June 1, 2016]. He is right of course.

From the perspective of compassion towards refugees, he is also right. Being a refugee is a tragic situation, not something to be cheered on. The whole point is to allow refugees to return home, or provide assistance as close to their home as possible. However, the Dalai Lama's comments are somewhat beside the point for three reasons.

First, many if not most of those flooding Europe are simply economic migrants, not refugees in any way.

Secondly, those cheering on mass migration aren't actually concerned about "refugees," they simply hate Europeans and North Americans and want them dispossessed.

Finally, many of the organized bodies enabling the immigration invasion do so because they profit from it. This of course includes the Roman Catholic Church. And this explains why the Roman Catholic hierarchy is far more concerned about any attempt to limit immigration than the almost unbelievable corruption and abuse within the clergy.